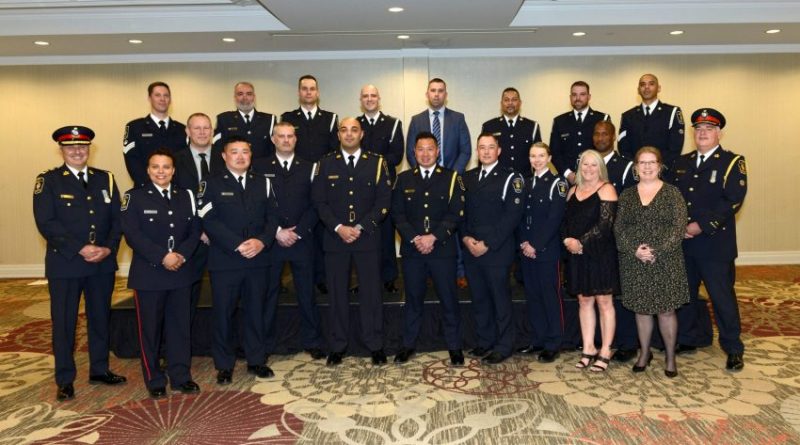 A police sergeant who saved an unconscious man trapped in a burning vehicle just moments before it erupted into an inferno has been recognized for his bravery and heroism.

He was on patrol in September 2019 and answered a call from dispatch about an automated distress signal from a rolled-over BMW in Georgina. The vehicle was engulfed in flames upon his arrival and though Abreu tried to settle the flames, his fire extinguisher was no match for the fire.

He managed to pull the driver to safety. “Thankfully, no one else was in the car. Sgt. Abreu administered first aid to the driver, who suffered serious head injuries during the accident,” YRP reports. “If it had not been for the quick actions of communicators and Sgt. Abreu, this man would have certainly perished.”

YRP, together with the community, honoured the “outstanding work” of both sworn and civilian members at the Police Appreciation Night Awards ceremony.

“The award-winning members included those demonstrating investigative excellence and diligence, those selflessly giving of their time and talent to better our community, and those building bridges with our diverse communities.”

Const. John Scrymgeour also received the Const. Garrett Styles Courage in the Line of Duty for his quick decision making after a simple arrest at a gas station turned into a fight for his life. Det. Zabi Aryaie received the Rob Plunkett Outstanding Service to the Community Award for his passion and dedication in serving vulnerable communities, including helping refugees in need of basic living necessities.

Staff Sgt. Kolin Alexander received the Herbert H. Carnegie Award for “working tirelessly” to cultivate relationships with the communities YRP serve, including the Afro-Caribbean Canadian community, and representing YRP on the Black Community Consultative Round Table.

Sgt. Mina Rahravan and Strategic Communications Specialist Susan Gibbs received the Herbert H. Carnegie Award for being co-chairs of the York Pride Internal Support Network. “Mina and Susan have been long time advocates for equity and inclusion, especially for members of the 2SLGBTQ+ community,” YRP reports.

Videos featuring the stories of the award-winning members can be found here.