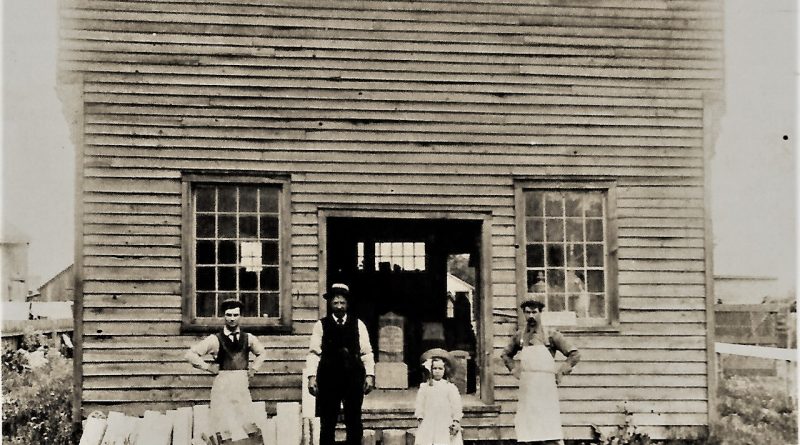 There is a plaque on this small building. It tells a huge historical story.

For three generations of the Wideman Family under Philip, his son Ludwig C., and grandson Bartholomew (Bart), operated Marble Works, a granite and marble company.

Ludwig C. Wideman moved the business to the Main St. site near the tracks in 1885. He had purchased the lot from John Jennings for $340 on July 9, 1885. The lot was vacant. The shop portion of this business is part of the original building that was built at the time.

This site has many connections to the founding families. The headstones crafted here may be seen throughout the province with the monument maker’s mark on the lower part of the stone.

This speaks to the skill and craftsmanship that once was, but has transitioned to the modern tools we have today.

This business, located close to the track, was likely due in part to the stones that would arrive by train. The local livery would then carry them by wagon to the shop nearby. Also, the nearness to all the traffic centred on the train activity would give them good promotion.

The simple frame store/shop once had two large windows with 20 panes of small glass. The windows placed symmetrically on either side of the shop door allowed for the full use of the sun, as the building faced south.

The central wide shop door allowed for access of the stones. The historic photo shows the six-inch wooden siding ran horizontal. Some changes over time have added an office to one side and changed the siding to include stone, which protects the bottom of the main wall.

A historic plaque unveiling happened on May 24, 1997, commemorating a century of business in the Village of Stouffville (1885 to 1985) and continuing. The local Whitchurch-Stouffville Historical Society in conjunction had ordered and placed the plaque for all to see as they would walk by in the days following.

This site is certainly a good candidate for Historical Designation under IV of the Heritage Act. The old business that once was is worthy of remembering as it touches many lives in the Village of Stouffville, throughout and beyond York County (Region).