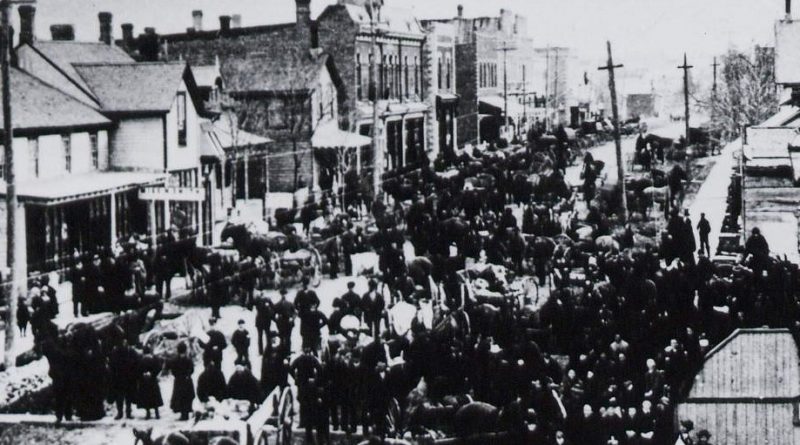 In 1881, Samuel George and his wife Esther (Wideman) lived in Carnarvon, Algoma. He was listed as a farmer and was Baptist by faith. The following year he is known to have started a business in Stouffville in the west end. The property was purchased for $3,000 when the average building lot was $200. It had been mentioned that the woodworking factory was already in place and was previously owned by Mr. Isaac Mark, who was listed as a carpenter as well.

1889, Samuel upgraded a drive wheel on the engine in his plant with an 8-½ foot wheel. A couple of years later, an accident occurred. William Davis, the son of Philip Davis, an employee of Samuel George, had his hand smashed. Two fingers had to be amputated.

Samuel was a carpenter and an employee. Later the same year, on May 1, 1891, W. B. Sanders was erecting a large vacation resort at Jackson’s Point. It was frame and concrete and was three stories high. Samuel George was given the contract to build it. Samuel also had done repairs for $9.75 at the Stouffville School. This was the school down the lane before the fire. Miss Hawthorne was the teacher in 1899. She had Olive George the daughter of Richard, and Harold George, the son of Samuel, attending the old school house.

The year 1892 saw a substantial commercial brick building go up in the form of the Merten’s Block.  The George Bros. was given all the factory work.

Mr. George has well been remembered as having the first power electric plant in the village. It was a 600-candle power electric light plant; it was on the corner of Second and William St. Nearly all business places, the hotel (now Stouffville Junction), and many private residences were lit from this plant. The George Bros. made a generous offer to the Village council to supply a complete system of street lighting to the whole community, but they were turned down.  They also added to their factory the best chopping mill in the vicinity.

Samuel and Richard had built 25 homes in Stouffville in 1895. George Bros. had never been so crowded with work as in the summer of 1895. There were no more industrious citizens than the proprietors of the mill located on Second St. In addition to the factory work, which was well equipped with all kinds of modern woodworking machinery, they had made for themselves attractive homes in the west end.

The woodwork on a large number of fine homes in Stouffville and its vicinity has been done by them. During the next season, they finished contracts for more than twenty-five houses. They also did custom work and gave attention to numerous small jobs of planning, making sash and doors, etc. With the George Bros., there was no lack of enterprise.

Photo: Village of Stouffville circa 1888. Photo courtesy of Whitchurch-Stouffville Museum and Community Centre #988.014.237