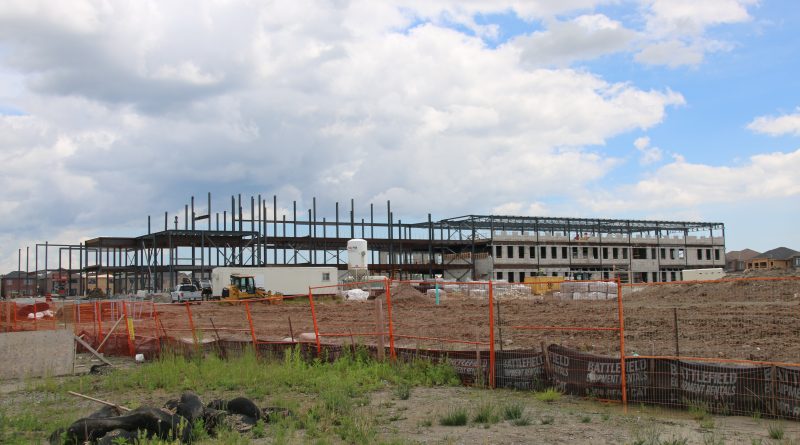 The York Catholic District School Board (YCDSB) received the Ministry of Education’s final approval to proceed to construct a multi-use facility in the Town of Whitchurch-Stouffville in late 2021.

Halfway into 2022, the new school located on the east side of Ninth Line across the road from Timber Creek Golf looks more than half done, but despite the highest hopes, it will not be ready for service until fall 2023 according to the latest plans provided by the YCDSB.

The 153,085-square-foot building on a 15-acre property is unique in that it will host a number of educational operations in one building while keeping separate identities. The facility will consist of an elementary school, secondary school and a child care centre to serve the residents of the Stouffville community.

Current immersion students of Brendan CES and St. Mark CES will attend the new elementary school upon its opening.

This expansion means that the YCDSB French Immersion program will be offered at 16 elementary schools and six high schools throughout York Region. The program aims to provide non-francophone children with a high degree of proficiency in the French language. Although the curriculum is the same as in the English-language program, the language of instruction for most subjects is in French.

In addition to the combined schools, a child care facility will also be added. No details of capacity or other specific have been released.

Photo: The new Catholic facility on Ninth Line will consist of an elementary school, secondary school and a child care centre to serve the residents of the Stouffville community.