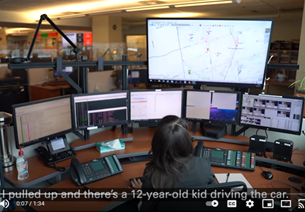 As part of its campaign to stop impaired drivers, York Regional Police have released video in which a 9-1-1 caller reports a 12-year-old boy driving a car with his alleged impaired father in the passenger seat beside him.

“This is crazy. I’ve never seen this in my life,” the caller told the 9-1-1 dispatcher. The caller pulled up to the driver, asked him how old he was and told him he shouldn’t be driving the car. According to the caller, the underage driver narrowly avoided causing two accidents.

The vehicle then pulled over and the father switched places with the child and, once behind the wheel, began swerving and braking, according to the caller. Officers were able to locate and stop the vehicle and charged the father with impaired driving and child endangerment.

Police launched the campaign, called Safe Roads: Your Call, on the Victoria Day long weekend to encourage people to call 9-1-1 if they suspect an impaired driver. “We consider these incidents a life-threatening crime in progress and will continue to respond to these calls,” says Const. Laura Nicolle.

More than 3,500 people call 9-1-1 to report impaired driving each year, possibly preventing serious collisions from taking place and leading to thousands of impaired-related charges being laid over the years., YRP reports. Police want drivers who choose to drive while impaired by drugs or alcohol that not only police officers who are watching for impaired drivers but also citizens so they should expect to be caught and charged.

“These 9-1-1 calls have come in to us from many different sources, from others motorists, pedestrians, drive-thru employees, gas station attendants, liquor store employees, neighbours, family and friends calling in to prevent potentially devastating situations,” says Nicolle. “These calls save lives.”

Pictured is a screenshot from the video released by York Regional Police. It can be viewed at https://youtu.be/IVuTW_UFrdU.