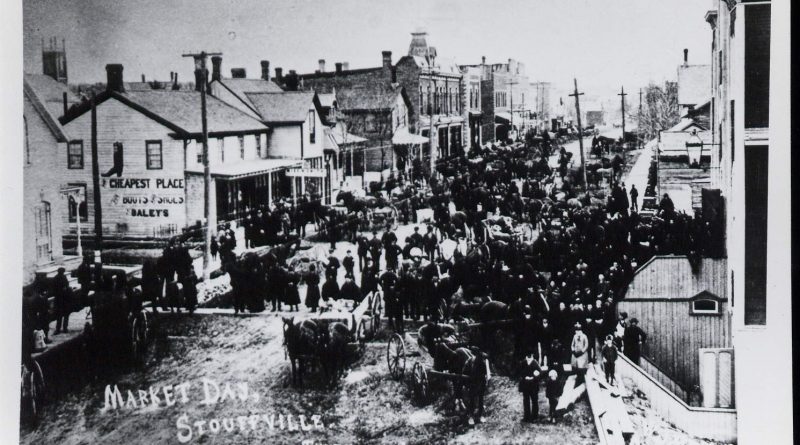 When recalling the beginnings of the Village of Stouffville, one needs to remember the people who built and were foundational to the commerce and entrepreneurship of this community.

They took the risk, moving into this village, some with very little.

The post office, the church and the school were the first institutions that formed our town. When people start to gather together, then businesses see the opportunity to sell merchandise.

From the beginning, Stouffville was a linear town with the Main St. running east and west.

Main St. was also the dividing line between Markham Township on the south side and Whitchurch Township on the north which is why it was originally named Townline. It was also called the plank road once the streets were paved with lumber planks from the local lumber mill (also located on Main St.)

To try and source our beginnings we start with the post office. Mr. Charles D. Sheldon was nominated as postmaster by William Mackenzie in 1829. Mr. Sheldon was appointed in 1832.

It is noteworthy to list the businesses; two churches, two doctors, four innkeepers and a variety of trades and general merchants.

The Congregational was established first in 1846 which began in the Merten’s front room and later was in the east end. The Methodist was next starting in 1856 in the old school house on Church St.

The one Common School had 100 pupils in 1866 and was located in the schoolyard of Summitview. There had been an early school on the Whitchurch side in a frame building as early as 1833. It joined with S.S. # 23 Markham to become Stouffville School.

The next big news item was the train coming to the village of Stouffville in 1871. The Toronto and Nipissing Railroad laid tracks having come north through Markham. It is hard to imagine that the village was still not incorporated.

“Pursurant to statue the following gentlemen being members of the council elect for the municipality of the Village of Stouffville for the year A.D. 1877 met this 15th day of January at 11:00 a.m. in Freel’s Hall and after taking the oath of office before Edward Wheler, took their places at the board.”

The Main St. linear village had emerged and businesses were doing very well. The “Market Day” photo shows the connection to business and people and buildings some of which still remain. Let’s continue to celebrate these icons of our history.

Photo: Village of Stouffville circa 1888. Photo courtesy of Whitchurch-Stouffville Museum and Community Centre #988.014.237