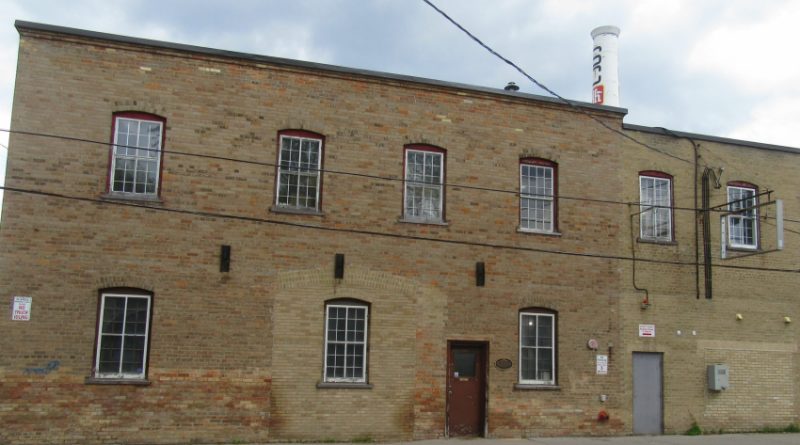 The landmark building constructed of yellow bricks at 33 Edward St. dates back to the early industrial days of the Village of Stouffville.

As you walk along Edward St. you can see the building has expanded many times from the first days.

I personally recall a large window facing onto Edward St. It is now bricked in. If you look carefully you may see it. Upon closer examination, I also noticed that the original building had grown to the south. You may see two windows on the second floor that appear different.

Edward Street was opened in 1876 as the first plan for new building lots was registered. The land belonged to Edward Wheler, the flour and sawmill owner. Shortly after in 1878, Mr. Wheler sold lot 27 and 28 to John Park for the sum of $300.

In 1891, Nathan Forsyth joined with a half interest (likely shares). I think Forsyth also may have done the first addition to the south. There was also a delay in him getting paid so it went to court.

In 1893, the Cook Bros. came into possession of this fine brick planning mill and sash and door factory formerly owned by the Park Bros. (John and James). It was well equipped with good machinery. The Cook Bros. added a shingle mill to their plant. They also were prepared to do custom work.

The firm was composed of Mr. Macklem Cook and Mr. Hamilton Cook, both of whom received their training on the farm and in the old square school house at Lemonville.

Lumber was cut from the bush on the Morris property up the Tenth Line in Whitchurch during the winter of 1928. It was hauled down to the Stouffville station.

In all, some four hundred thousand feet of lumber was cut, which included 3,500 railway ties. These were sold to the C.N.R. and were shipped to Trenton. A considerable quantity of lumber was sold to the local planning mill (Schell Lumber) and the hardwood to the Morgan Co., in Toronto.

The design of this structure is a massive brick building for industrial use. The windows reflect the time it was built as typical 12 over 12 windows with segment arches. This is from the period of 1870s.

The brick work has voussoirs over the windows and corbelling near the roof line. You may see the brick pattern is Flemish bond which shows half bricks every fifth row. This would indicate a solid brick construction. The original shipping bay has been bricked in and now has a matching window in the centre.

The heating back at the turn of the century was shavings and coal. It was later changed to coal and wood. The tall chimney is difficult to see as it is centred in the building and one needs to be further away to see the Schell name and Home hardware logo.

Some of the older customers remember the driving storage sheds which were along the south property line. The pine lumber was sorted and placed in binds by size. Now along the rear yard is the only remaining example of this dry storage.

There are hints of days gone by, one only need to know where to look.