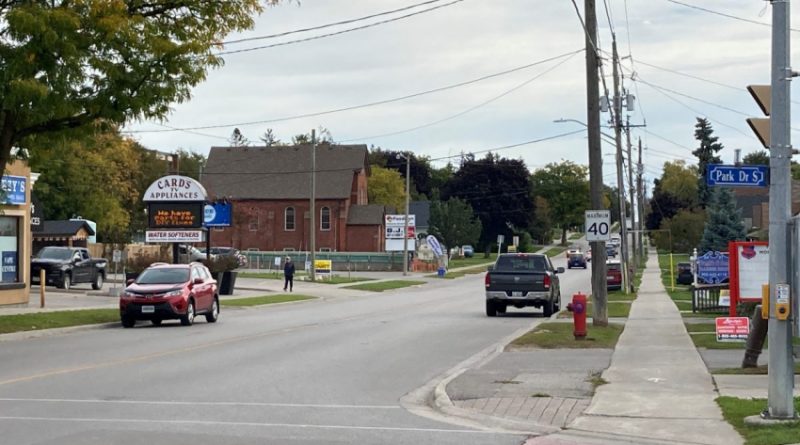 With traffic safety measures planned as part of the upcoming Main Street redevelopment, the Road Watch Working Group is asking for the enhancements to extend further east to Tenth Line in light of excessive speeds observed.

David Kinder, a representative from the group, made a delegation asking council to consider safety improvements “at least equal to, if not above, what is being considered for the downtown core” at the Sept.21 council meeting.

Currently, traffic flow slows down through the downtown area due to a bottlenecking effect, then accelerates as it flows east beyond the bottleneck. There is significant concern amongst Main Street residents that downtown safety improvements with the redevelopment will exacerbate the issue and result in “unintended consequences.”

Kinder petitioned residents living along Main Street from Stouffer Street to Tenth Line. He was offering the opportunity to sign the petition to support the request for improved safety measures and to get comments and feedback regarding concerns and suggestions for methods to help curb the excessive speeds.

Of the 30 occupied homes visited, Kinder obtained 36 signatures supporting the petition, with multiple signatures from some homes.

“It was obvious when I spoke to those 30 homes, there was a high degree of passion and frustration,” said Kinder.

There was also general commentary that the police presence along Main Street is appreciated, but residents would like to see more. Some residents also expressed frustration over “not being heard” in the past when voicing concerns.

“We’re not proposing that we know every way to make it safer,” Kinder said. “I think we just need to be heard.”

He shared that his passion for road safety and motivation to participate in the Road Watch Working Group stems from an accident in which his son Matthew was struck by a vehicle and catastrophically injured in front of his home about three years ago.

“Your delegation is right on the money,” said Mayor Iain Lovatt, adding that traffic and speed have been top issues for council this term.

Mayor Lovatt also suggested that the safety improvement extension get broadened to include the stretch of Main Street between Park Drive and Stouffer Street, given that traffic speeds tend to pick up at that point. Kinder agreed with this suggestion.

Ward 6 Councillor Sue Sherban raised the point that, downtown redevelopment aside, the excessive speeds are happening today and that “something needs to be done sooner than later.”

Sherban suggested that Brian Kavanagh, director of public works for the Town of Stouffville, meet with east-end Main Street residents to review their concerns and options to make the roadway in front of their homes safer.

A resolution was passed by council to refer the Road Watch Working Group’s delegation to staff and to inform the road safety plan to extend east of Park Drive.