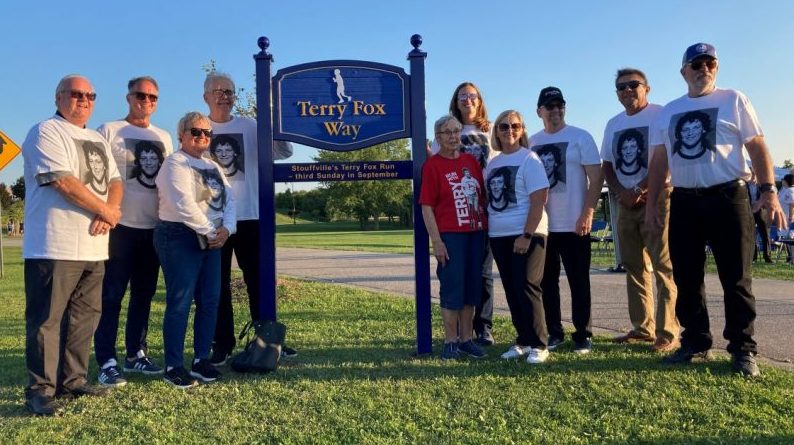 Terry Fox’s legacy now has a permanent place in the Town of Whitchurch-Stouffville.

The section of Park Drive along Memorial Park has been officially co-named “Terry Fox Way.”

The co-naming honours the significant impact that Fox and the Terry Fox Foundation fundraising has had on cancer research and the lives of Stouffville residents and their loved ones.

At a Sept. 8 ceremony, Mayor Iain Lovatt and council, past and present Stouffville Terry Fox committee members, and community members, gathered at Memorial Park to celebrate the sign unveiling near the intersection of Park Drive and Burkholder Street.

Stacey FitzPatrick, chair of the Stouffville Terry Fox Committee, shared that the Fox family and Terry Fox Foundation sent their gratitude for honouring Terry and his legacy.

She told the gathering that Terry’s brother Fred shared that Stouffville’s 2013 Terry Fox Run was “one of the best community runs (he had) ever participated in.”

Most members of the Fox family have visited Stouffville over the 41 years that the fundraiser run has been taking place in the community.

FitzPatrick, committee chair for the past six years, looks forward to the opportunity for participants to gather in person again this year after a two-year hiatus caused by the pandemic.

“This sign stands as a permanent reminder of this community’s strength and perseverance, just like Terry’s. As we look forward to this year’s run live and in person, finally, we are humbled by this community’s generosity, we’re inspired by their courage, and we walk, run, scoot, bike, and blade alongside all of you with pride,” she said.

FitzPatrick added, “Terry’s name inspires people to come together and so many people here tonight who have lent themselves to this cause.” She acknowledged past committee chairs Dixie Sellers and Sandy Schell Kennedy, both in attendance at the sign unveiling.

“The Terry Fox Run is an integral part and an important part of our community. Taking place every third Sunday of September, it is a tradition in Whitchurch-Stouffville and a really, really good one,” said Lovatt.

He told the gathering that Stouffville’s Terry Fox Run is one of the most successful runs in Ontario, raising more than $2 million since 1982.

“There’s not a family in our community and probably our nation who hasn’t been touched by cancer,” said Lovatt. He shared that his 27-year-old brother-in-law was diagnosed with leukemia three years ago but is thankfully now in remission.

He looks forward to seeing his brother-in-law at the Sept.18 event in a red t-shirt. Red t-shirts and lawn signs are given to cancer survivors to recognize and celebrate their survivor status.

The idea for the street co-naming was brought to council in September 2021 by Stouffville resident and long-time Terry Fox committee member Jim Mason.

Lovatt shared that there was no question from any council members that they should proceed with the co-naming in Terry Fox’s name. It was “one of the quickest decisions we’ve made as council,” he quipped.

During the presentation, Mason called Stouffville “a Terry Fox town.”

He explained that he presented his idea via Zoom to council members and expected a positive response; however, he called the unanimous and on-the-spot decision to move forward with the initiative “unbelievable.”

The mayor offered his thanks to both Mason and FitzPatrick for their dedication and support to the cause.