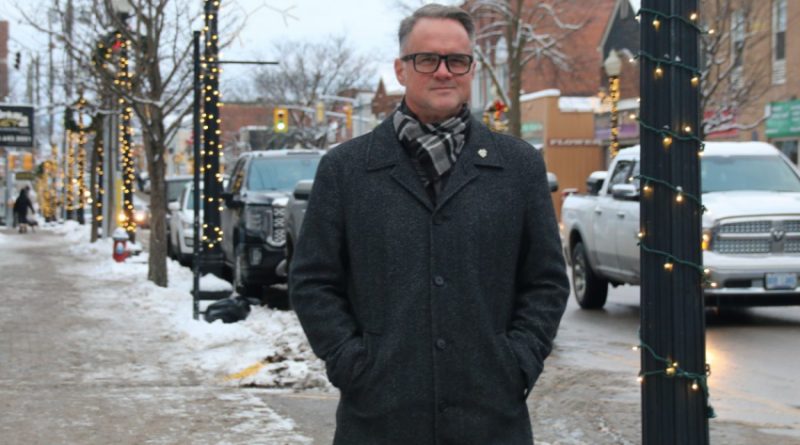 With a new mandate from the people in October’s municipal election, a new council and a new year before him, Stouffville Mayor Lovatt is pumped to get rolling on some big and long-awaited projects.

He is so pumped, he didn’t mind meeting outside on a cold December afternoon to discuss one of the biggest projects on the go, the reconstruction of Main Street. In fact, it was his suggestion.

The long-awaited re-do of downtown Main St., particularly from Albert St. in the west to Park Drive in the east, will see a complete rebuild of infrastructure, including sewers, sidewalks and even bury hydro lines and other wires currently overhead. It will be a huge job and come with some considerable inconvenience, but with much of the current infrastructure being a hundred years old and decades past its prime, it is needed. The project promises to provide long-term benefits and convenience for residents, says Lovatt.

“Better parking, rights-of-way, street furniture, patios… it will be amazing,” he enthuses. But adds, it will be a mess for up to 18 months.

The rebuild was planned and budgeted for during the last council with a public consultation process that was completed in early September. It will likely involve shovels in the ground by early 2024, while 2023 will see the completion of prep tasks like completing the Edward St. upgrade and opening that north-south route to allow an easy connection to Millard St. for commuters to travel across town on the north side of Main when construction gets underway as they can on Hoover Park Drive south of Main.

The real challenge is in the details.

Do you shut the whole Main St. downtown or shut it down in parts?

This year will see further consultation with merchants and residents to address such questions. “We have to work with them,” says Lovatt. Obviously, from an efficiency perspective, “shutting down the whole street at once would be best as opposed to doing one side of the street and keeping one lane open. That slows the whole thing down.” But he concedes that there needs to be a way to prioritize pedestrian traffic that feeds the downtown businesses.

Lovat hints that some measures to ease the pain for merchants like a promised elimination of the downtown merchants’ levy and other considerations. “But,” he says, “this is a hundred-year plan. Were going to do it once and do it right…bury the hydro, put internet throughout and make it something we can all be really proud of”.

The full proposal, along with consultant illustrations, can be found at cometogetherws.ca.

While Main Street reconstruction is by far the biggest project, there are a number of other projects that will continue to get attention in Whitchurch-Stouffville. Commercial development is one ongoing focus of Lovatt and council.

Lovatt, supported by the majority of council, has, for some years and without apology, lobbied the province to open up some eastern pieces of the Greenbelt along the Hwy. 404 corridor for commercial development as has been done for surrounding municipalities to gain a lucrative, steady commercial tax base. This is needed as 95 per cent of land in Whitchurch-Stouffville is in the protected moraine with available residential development land and the lower residential tax base it provides, dwindling.

Self-declared protectors of the Greenbelt land and political rivals have bitterly opposed the notion of any opening of land in Whitchurch-Stouffville – for residential or commercial development. The province’s Build More Homes Faster Act (Bill 23), which proposes opening some Greenbelt land and slashing some developer fees for some housing development, has further stoked their ire, and some have pointed that frustration at the mayor and council seeing them as part of a plot that will destroy the pastural nature of rural Stouffville.

Lovatt does see the Act as a sign that political attitudes might be shifting in a direction that will allow limited commercial development. But he flatly rejects the narrative that he is anti-conservation.

“It’s an interesting narrative,” he says of criticism, “because I have never once taken a position on Bill 23.” He notes that the Act is primarily about residential, unconnected to commercial aspirations, although he does hope to see some positives for Stouffville from it as it may incentivize developers to provide purpose-built rentals that Stouffville sorely lacks.

“What I have done, and council has done, has moved motions that were approved at the region for very site-specific settlement boundary expansions within the Oak Ridges Moraine. Those are Bethesda Lands and Gormley,” he continues, noting that he has never argued against the Greenbelt itself nor the principles of conservation that underpin it. Just the arbitrary methods used to decide on boundaries.

The amount of space he has lobbied to open is 168 hectares in Gormley and 123 hectares in Bethesda, amounting to approximately four per cent of the 95 per cent of protected land. This is all that is needed to ensure some economic stability he maintains.

He also points out that even if the limited opening is achieved, he hastens to note that any development still must go through a robust review process that will still require environmental policies be followed and studies done. “It has to be built to protect the moraine.”

In addition to private enterprise that would provide income, the opening of the lands would have also allowed the development of the Bethesda sports fields to include, say, a soccer dome and other four-season sports facilities.

With that off the table, and the small, money-losing, sub-par Soccer City now sold, Lovatt says, Ballantrae, although further away, will be home to an expansive and awesome facility that will operate as a revenue-neutral project and include over 50,000 Sq./ft of indoor courts and training facilities for various sports, almost 8,000 Sq./ft clubhouse and a full size, 100,000 Sq./ft FIFA-regulation artificial field under a dome that can be subdivided into smaller practice fields and be operational by fall 2023.

“There was a lot of criticism about it not being at Bethesda Park,” Lovatt says. “But Bethesda Park is outside the settlement area of the town and zoned as Oak Ridges Moraine which only allows a 500 square metre building. I would have love to have it closer to town, but when we looked at what we had available that wasn’t going to cost us money to go out and buy land, this is the only place to do it.”

Other developments the mayor says to look for in 2023 include many shovels in the ground in the Hwy 48 and Hoover Park area. This includes Flato Developments residential land southwest of 48 and Stouffville Road. In addition, the Corebridge owned property north of Hoover Park shopping district will have mix-use development and a long-term care and seniors home campus dubbed Schlegel Villages, just east of Tim Horton’s on Hoover Park Drive will begin eventually see 192 LTC beds and 530 retirement home apartments.

Finally, the Memorial Park skating loop, while initially planned for this winter, has been delayed, not by money, which was provided for by the federal government, but by supply chain challenges. But the money is still there. Lovatt promises, with a familiar enthusiasm, that we’ll see that fun addition to the downtown in late 2023.

All this development is, of course, what has occupied the attention of the mayor and council for years. New mandate, old challenges. But it seems that at least it all comes with a new determination to tackle the pressing issues and that, for residents, can’t be a bad thing.

Main photo: Stouffville Mayor Lovatt is pumped to get rolling on some big and long-awaited projects.