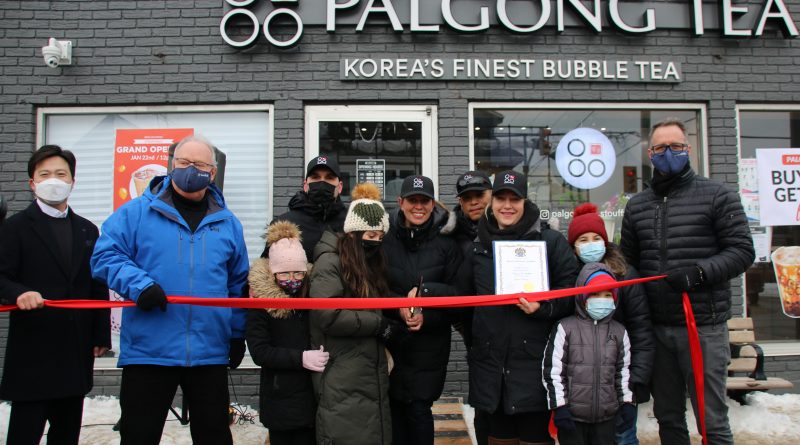 Grand openings, such as they are, usually don’t attract too much attention. But the opening of Palong Tea, specializing in Korean bubble tea, seemed to be just what the doctor ordered for a blustery Saturday as hundreds lined up for the tasty drink.

Of course, the offer of free samples for the assembled didn’t hurt either. But still, pretty impressive given the wait for the treat.

For downtown Stouffville, it was also nice to see a good news story of a business opening instead of businesses exiting storefronts thanks to COVID restrictions and cold weather that have zapped foot traffic and profits.

The Stouffville location is the 10th of the fast-growing franchise’s stores. Run by two local families, the store looks like a sure hit so far.

Co-owner Cristina Cappuccitti, introducing the team and the store at the recent opening said, “this has been the greatest adventure we have taken and we could not have found a better home for Palong Tea than Stouffville.”

Mayor Iain Lovatt and Ward 5 councillor Richard Bartley were also on hand to celebrate the opening.