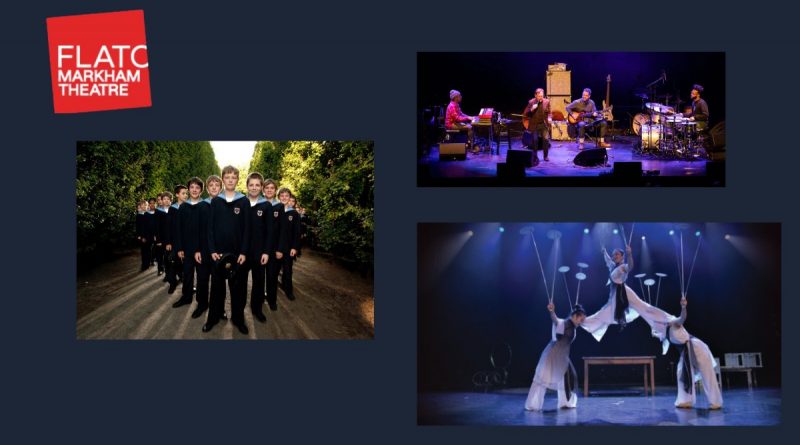 After a great start to the 22/23 season this September, The Flato Markham Theatre is looking forward to another exciting month of performances this October.

“It’s a good thing,” says Flato Markham Theatre GM Eric Lariviere. “There’s a lot going on. People in Markham and around Markham will want to come and see.”

The theatre’s own Diamond Season continues first with the Kurt Elling Quartet on October 6. This show, rescheduled from April 2020, is hotly anticipated by Markham’s jazz community and promises to be an instant classic.

“We absolutely cherish the jazz audience we’ve managed to attract at the theatre. We want to bring them nothing but the best,” says Lariviere. “Elling is one of the great North American jazz singers. He’s certainly the best of his generation.”

Elling’s show, Century of Heroes, features the work of Sinatra, Nat ‘King’ Cole, Ellington and Jon Hendricks as interpreted by Elling himself.

“People always expect great international artists from the jazz series we’ve developed here in Markham,” adds Lariviere. “With Elling, we’ve managed to get just about the best out there.”

Elling is followed by the Markham return of the Vienna Boys Choir on October 13. The choir, best known for their angelic sopranos and altos, was last on a Markham stage for a triumphant performance in 2017. The show features folk songs, world music, and classical favourites performed in the style practically invented by the 500 year-old choir.

Just a couple of days later, on October 15, award-winning Canadian professional dance company SAMPRADAYA Dance Creations takes the stage. The group specializes in the creation and production of classical and contemporary dance works rooted in the Indian Classical dance form of bharatanatyam and has earned raves from publications near and far, including the New York Times. This month’s show, Sankhya: A Dance Symphony of Numbers, is the world premier of their latest work.

Next up is Gemini-winning funnyman, Jeremy Hotz and his newest show, Marquis de Sad. Hotz is returning on October 28 after his sold out 2019 performance that nearly brought down the house. Fondly referred to as “the master of misery,” Hotz has an impressive list of appearances, credits, and awards; based on his last trip to Markham, the show will be a hot ticket.

Then, the very next day, The Peking Acrobats with The Shanghai Circus brings sensational Chinese acrobatics, comedy, balancing feats and much more to Markham with two shows on October 29. The show demonstrates the achievement of perfection through finding harmony between mind and body – an ancient concept in the Orient. This concept has been transformed from its simple “folk art” roots, to a fully realized stage show that approaches the spectacular by centuries of tradition.

“We bring a really unique experience to our audience,” says Lariviere. “This high calibre of show in a truly intimate setting is a rare thing, but it’s part of our promise.”

In addition to the Diamond Season, The Flato Markham Theatre features many independently produced shows this October.
Frozen in Time, a musical for the kiddies, has two shows on October 16.

The Kindred Spirits Orchestra returns to live performance in Markham with the Forbidden Symphony on October 22.

Markham at the Movies brings the beautiful film, Scarborough, to its screening on October 25.

There are even two musical tribute nights that promise to get minds reminiscing as well as bodies moving. The music of Abba and the disco era are alive and well in Markham on October 20 with Abbamania & Night Fever. This is followed by a trip back a decade earlier with The Markham Concert Band’s British Invasion performance on October 23.

Only two months in and it is safe to say that live performance is back in full swing in Markham.

Tickets for all shows available via the Markham Theatre Box Office

Photo: Kurt Elling, The Peking Acrobats, and The Vienna Boys Choir are among those performing at the Flato this month.