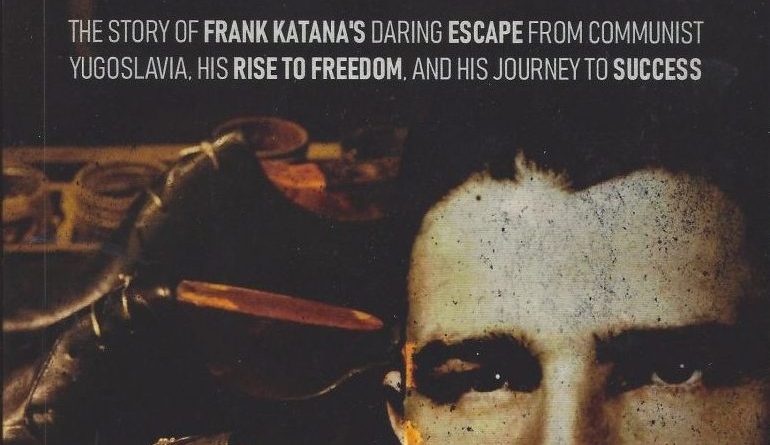 Susan Cork has been thinking about freedom lately.

It’s actually been on her mind for a long time, having been taught its value at a young age and admonished to never take it for granted from someone who didn’t have it and sacrificed much to get it — her father, Frank Katana.

Now, the Markham author has taken the lessons learned from the hard life experiences of the young Katana who escaped communist Yugoslavia to start a new life in Canada and given them new life and purpose in her book, The Soul of a Shoemaker.

The engaging, well-told story dutifully chronicles true-life experiences familiar to many immigrants who have had to give up much to come here to start again.

In this case, the rich and beautiful traditions of Croatian culture, the loving embrace of family and even the arrival of the one true love into Katana’s life are presented in stark contrast to the hardship and poverty of a post-WWII communist dictatorship that demanded unreserved fealty to corrupt leadership that offered little in return.

But as many who have come with no knowledge of the language, no money and few connections know, even here, hard choices, hard work and sometimes, hard people await. But so too does freedom and the dreams that come with it, and The Soul of a Shoemaker painstakingly maps out the struggles of cobbler and one-time firefighter Katana and, eventually, his true love Ljubica. The book follows the couple from the old country through their lives in Toronto and to an eventual triumphant return to their hometown with children in tow to witness the culmination of their struggle.

In a conversation with Cork, I asked her a few questions about the book:

It’s clear you certainly have much respect and admiration for your father and his journey. What was the impetus to put his story to pen now?

We grew up hearing my dad’s stories about how he escaped the former Yugoslavia. I thought they were great stories.

During the 1980s, he was featured in a book titled the Canadian Entrepreneur Success stories, which was the first time I read about his escape story. Since then, I knew I had to publish his story one day.

Being locked down during the pandemic was the trigger to push this project. I felt we were living through what my father experienced in Yugoslavia.

When a government imposes mandates that infringe upon your fundamental rights, such as free speech, freedom of assembly, and freedom of movement, the terrible lingering feeling of helplessness and imprisonment beat you down.

I could feel in my own frustrations how he must have suffered under communism post World War II. Here we were in our beautiful country locked down, forced to stay home, away from family, or we risked massive fines and even imprisonment if we so dared speak up against the government or even sat on a park bench. That was so eerily similar to what my dad experienced, which I explored in my book.

He believed he would have a better life for himself and his family if he could have the opportunity to thrive in a free country. This story is a glimpse into his life on the farm, his challenges living under the communist dictatorship in Yugoslavia, and his dramatic escape to freedom in Canada.

So, I finally decided it was the right time to publish my dad’s story. From the time I committed to the publisher, I researched historical aspects of my father’s life and story, and interviewed family members here and in Croatia by email; I finally published the book. It took two years.

In the later pages of the book, you describe in the third person Susan’s triumphant visit to Mali Bukovec, the ancestral town of your parents. But of course, you were there. Do you remember what went through your head at that time?

I have snippets of memories that have stuck with me. The volunteer fire department gave me a commemorative hat to wear during the ceremonies welcoming my dad back to their town. I remember marching in the streets with my family and music playing by the local band. They threw a massive party for him as a thank-you for his donations back to the community.

I’ve included a picture of my parents and me walking through the town with the volunteer firefighters.

What is the principal message you would like people who read the book to get out of it?

Never give up. Take risks if you desire freedom, love, and success. Always follow your passion. As my dad, Frank, once stated: “You have to believe in yourself…You need that drive to succeed.”

You can get a copy of The Soul of a Shoemaker at https://www.amazon.ca/dp/B0BJD5RL1M