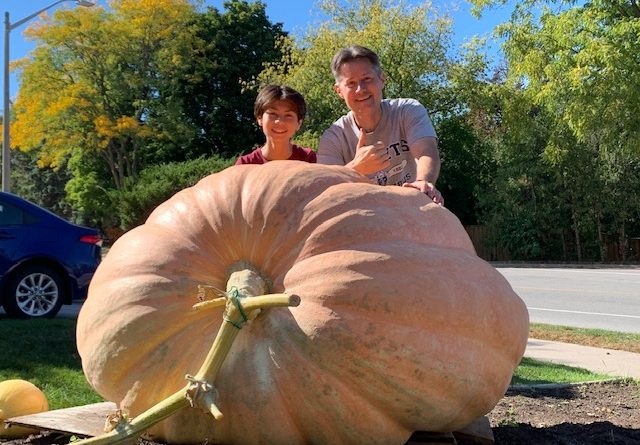 Pumpkins can come in many sizes, but you don’t often see one that weighs more than 1000 pounds. 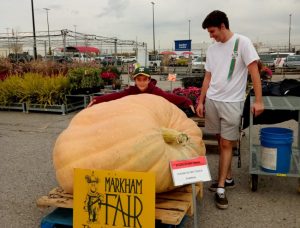 Local resident Tim Smith managed to get his massive 1025-lb. pumpkin to the recent Markham Fair for the thousands of attendees to view and take some selfies.

Growing the massive pumpkin was a project to show his kids. With the help of Markham Fair, they organized with Fairgreen Sod to bring it up to the fair and have it on display for all those to see. This became the award-winning pumpkin of the fair.

According to Smith, it required at least 100 litres per day of water to feed and sustain the pumpkin. He said this basically doubled his water bill because the month of August was so hot.

Once the fair wrapped up, the plan to relocate his huge pumpkin began. Smith wasn’t bringing the pumpkin home. So Marsha Fortus, one of the fair’s committee members, offered to make a donation to the fair in turn for being able to showcase the pumpkin where she works at the Canadian Tire garden centre.

“I thought this pumpkin could still be on display for people to come and see what a really big pumpkin looks like,” Fortus said. “So the pumpkin is now residing at the Canadian Tire in Stouffville at the Garden Centre if you want to come and take your picture with this great pumpkin.”

After Halloween, it is going to be donated to the zoo to feed the animals.

Main photo: Tim Smith and his son, Kai, pose in front of their 1025-lb. pumpkin.