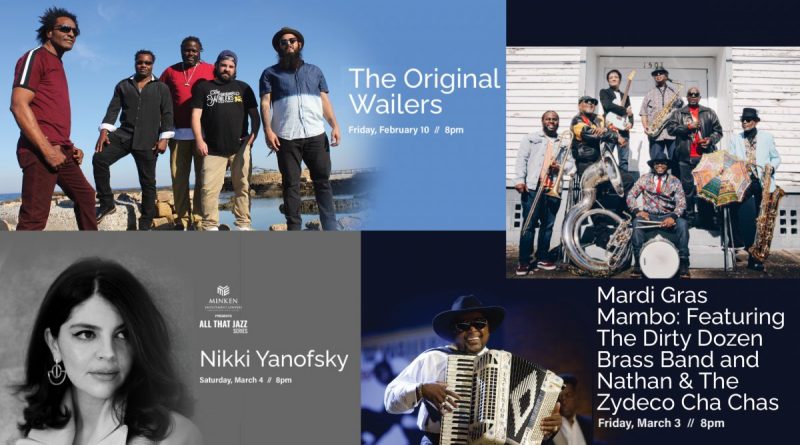 With an excellent holiday season in the rearview mirror, the Markham Theatre has enjoyed a strong series of shows in early 2023 and February and early March only continue this streak.

On Feb. 10, The Original Wailers bring 70s reggae to Markham. The band features Bob Marley’s handpicked guitarist dating back to 1974, Al Anderson. Anderson sees it as his mission to keep the energy and music of Bob Marley and the Wailers alive for as long as they possibly can. The Grammy award-winning band promises an evening of hits and sing-alongs.

“It’s not a genre of music we do a lot,” says Lariviere. “I’m very excited to engage people who want to hear it, and this band is a great choice to do it.”

Not everyone can claim to have been to a New Orleans street party. However, the music from such a party comes to you in the form of Mardi Gras Mambo on March 3.
The Dirty Dozen Brass Band are pioneers of the modern New Orleans brass band movement and is recognized worldwide as a must-see live act. They’ll be joined on the show by Nathan & The Zydeco Cha Chas. This evening promises a master class in blues, cajun, zydeco, R&B, and New Orleans soul music.

“We’ve done some great New Orleans Jazz before,” continues Lariviere, “but this is going to be quite a party.”

The very next night, March 4, sees the return of Nikki Yanofsky to Markham.
Yanofsky has worked with a stunning assortment of music legends; Quincy Jones, Phil Ramone, Herbie Hancock, and Stevie Wonder. She has a unique voice that made fans of music lovers across the spectrum. With her new album, Nikki by Starlight, she offers a contemporary retelling of The Great American Songbook. Yanofsky hopes to celebrate jazz music for purists but also bring the music to new fans as well.

“These shows are part of Nikki’s return to her jazz beginnings,” Lariviere says. “It’s going to be a great night for sure.”

It should also be noted that there are independent producers offering shows this month as well.

Markham Little Theatre is back for its first show of 2023 with Laura Wade’s new comedy Home, I’m Darling, which runs from Feb. 15 to 18. After this, Unionville Theatre Company marks its first post-pandemic performance with their telling of Sondheim’s slightly-bent take on Mother Goose in Into the Woods from Feb. 24 to 26.

“Both Unionville Theatre Company and Markham Little Theatre are absolute cornerstones of Markham’s arts community with the work that they do,” Lariviere says. “They’re our foundation too. We do 250 events a year at the theatre, and by far, the majority of them feature community groups like these.”

A newer group making some positive waves at the theatre is Markham at the Movies. The group’s mission is to bring award-winning Canadian and International films to Markham, and they’ve had growing audiences each month for years now. They’re back at the theatre on Feb. 28.

“This group is one of my favourite success stories,” Lariviere says. “They’ve been building a steady audience by bringing in great films every month, and people have really responded.”