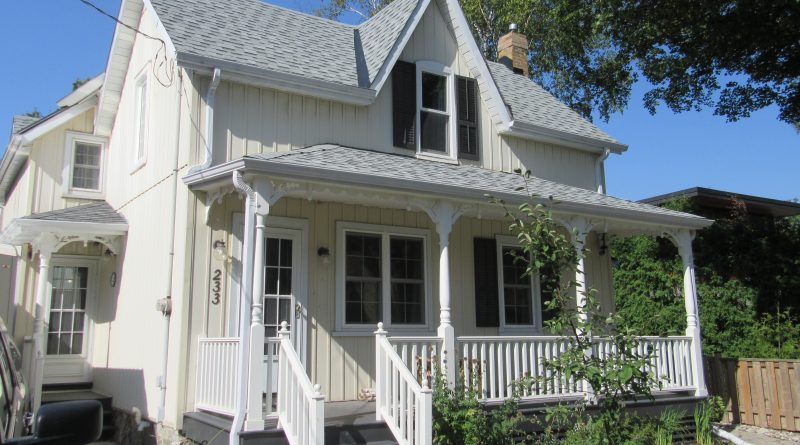 This decorative Ontario vernacular home at 233 Second Street has a long history.

The subdivision plan for this area of the west end of the Village of Stouffville was surveyed on Dec. 10, 1881 for William Somerville. The corner of Charles St. and Second was a double Lot being lots 52 and 53 which was about 1-½ acres.

The first owner was David Williams who purchased it to build this fine house. He paid $175 for both lots in 1887 and took out a mortgage of $140.

Mr. Williams also took a mortgage of $500 which would indicate that he was building a residence.

Mr. Williams sold to Mr. Daniel Grove in Dec. 1889 for the price of $750 again for both parcels of land. Mr. Grove lived there for over 12 years. He was a railroad Section man.

It is interesting to note the fire insurance map of 1910 shows this building as a frame 2-story with a 1-½ story addition on the rear and single story storage on the north end of the addition. The 1924 fire insurance map shows no changes.

Mr. Closson had been a farmer on Lot 4 Concession 9 (Ninth Line) just north of the village. He came to town with his wife Lottie and their son Donald R. Closson.

Back in 1916, Mr. Closson was ill with peritonitis before his life-saving surgery was done by Dr. Robertson who was the chief surgeon of Sick Kids Hospital at that time. This is another connection of Stouffville to Sick Kids Hospital in Toronto.

Mr. Closson held the position of Secretary for the United Farmers Organization. As a market gardener he grew cauliflower and cabbage and expanded his crops to include onions.  The oral history tells of an onion barn on the next property on Second St. which was later converted to a private home in 1947. It was described as being 26 ½ by 8 ½ and the lot was included for sale.

Following a lengthy illness, Mr. Closson passed away in the Brierbush Hospital on Oct. 6, 1966. He was 77 years of age.