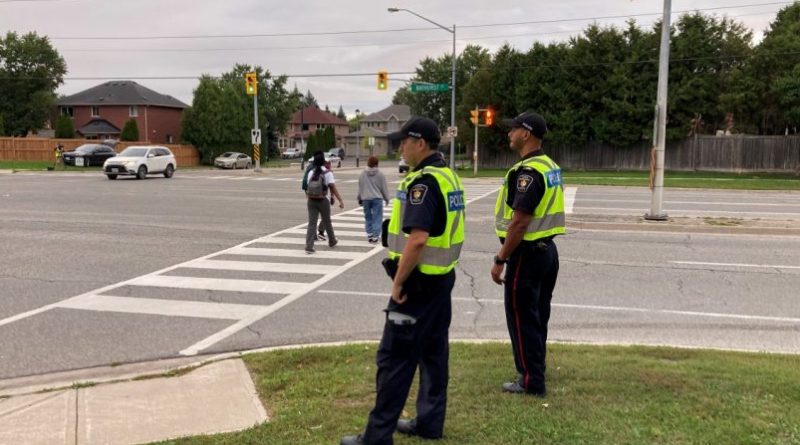 Kids have returned to school, and road traffic throughout the region continues to increase. The York Regional Police (YRP) annual Operation ABC initiative is more critical than ever.

Operation ABC, or Always Be Careful, was created in 2006 to promote road safety awareness in and around school zones.

“Safety is our number one priority. It’s a shared responsibility for all road users – both pedestrians and drivers, so that’s why we’re out here today reminding them to pay attention to the rules of the road and to make sure that they’re abiding by them,” said Constable Amy Boudreau, media relations officer for YRP.

The focus is to draw drivers’ attention to the return of students to school and remind students and other pedestrians about their part in road safety and active transportation.

Bathurst Street and Keith Avenue in the Town of Newmarket is one such intersection, with two elementary schools in very close proximity. The neighbourhood is primarily residential, and few kids get bused, so pedestrian traffic is high.

Heavy traffic flows along Bathurst Street, which serves as a thruway – large trucks included – reinforcing the need for safety awareness.

The intersection served as a kick-off location for this year’s Operation ABC, with officers issuing informational postcard handouts in place of tickets. The first step of the program is education, followed by enforcement.

“We don’t want to be giving out tickets. We hope that people will obey the rules of the road. Unfortunately, sometimes, they don’t, so the enforcement piece is another deterrent for people.”

“We want to promote active transportation, but if you’re going to send the kids out on their bikes and walking to school, you want them to do so safely,” said Constable Todd Snooks of the YRP Road Safety Bureau.

It only takes a moment to miss seeing a child walk onto the roadway. The rate of speed can be the difference between stopping without incident or potentially tragic results.

Paul, a veteran crossing guard who has patrolled the increasingly busy Bathurst and Keith intersection for the last 17 years, shared that he is thankful never to have had an incident at the intersection, “but it’s been close.”

In addition to speed and the occasional running of red lights, he cites that one of the biggest dangers is drivers turning left who are so focused on making the turn that they don’t watch for pedestrians.

YRP urges all motorists to drive defensively and courteously. Obey school zone speed limits and crossing guards. Be alert for kids who may not be paying attention. Avoid speeding, especially in residential neighbourhoods, and obey the laws governing school buses.

Parents are encouraged to have regular conversations with their kids about safety. Paying attention to surroundings – with eyes up instead of looking at a phone, is vital. If kids insist on wearing earbuds, Constable Boudreau strongly recommends wearing only one while walking so that there’s an ability to hear potential dangers.

“You can be a distracted driver, but you can also be a distracted pedestrian,” she added. Being in tune with surroundings allows a pedestrian to make a quick judgment and react faster in a dangerous situation.

Cyclists are reminded to wear helmets and to dismount their bikes at crosswalks. Being off the bike allows for someone to react more quickly and easily. It also forces cyclists to slow their speed so that they don’t suddenly appear to drivers with little time for them to react.

York Region has also taken positive steps to increase safety for all road users. Locations, including The Bridle Trail and Kennedy Road intersection and corridor in Unionville, have been newly designated as Community Safety Zones.

The intersection is close to an elementary school with significant pedestrian activity from kids and their families walking to and from school and heavy road traffic in all directions.

Features include speed feedback signs on Kennedy Road, plus numerous safety enhancements at the intersection. Zebra crosswalk markings, no right turns on red, pedestrian head start in the east and west directions, plus more green time for crossing in east and west directions during morning and afternoon school bell times improve safety for everyone.