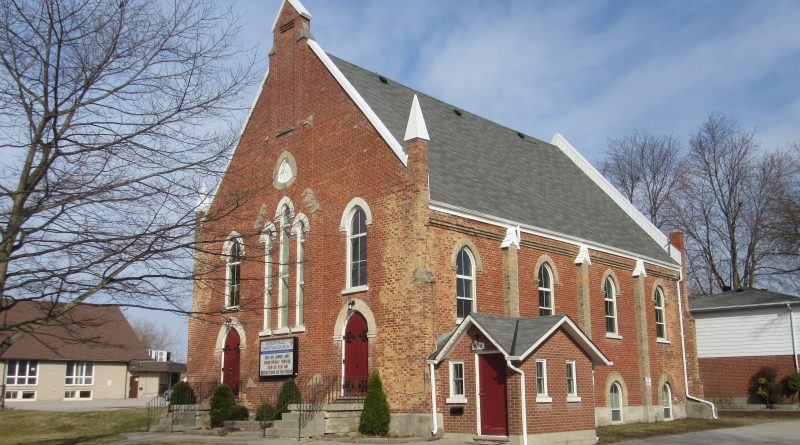 The Congregationalists have the honour of forming the first church organization in the village of what is Stouffville. The first service was performed by the Rev. Ludwig Kribs who was the first graduate of the Congregational College of British North America.

That first service, March 4, 1842, was at the house of Mr. Claus Mertens, west of the village – Lot 34, Con 8, Markham, where the Stouffville Legion Hall is now.

The congregation consisted of eight persons. The constituent members were:

The first marriage performed by Rev. Kribs was for Henry Johnson of Markham Twp., to Jane Brown of Whitchurch on December 22, 1842, and witnessed by William Brown, Sr. and James Brown. The location is given a transcription as being in Stouffville. It was likely in someone’s home as the formal church building had not yet been constructed.

On June 15, 1843, Rev. Ludwig Kribs was formally chosen as pastor and David Cash as Deacon.

For five years, between 1842 and 1847 the services were held in the frame schoolhouse (built in 1833) located in Lot 35 Con 9 Markham Township which is on the west side of Church St. north of Main St. on what is the current site of Stouffville United Church.

In 1847 the first church building was erected. The Rev. Mr. Kribs was the architect and builder and personally performed the principal part of the work. On February 23, 1852, Rev. Kribs executed a deed giving the church the land on which the church stood and also one acre of land for a cemetery. For twenty–seven years the congregation continued to worship in this building.

In 1869 a temperance pledge was placed in the church book and the members requested to sign it. It is well known that prominent members of the congregation had been for years forward in the temperance cause. Several young men from the church became ministers in the denomination.  Some of the men from here were Frank Day, D.D., Daniel B. Nighswander (Granby, Quebec) and James T. Daley, B.A., I.J. Swanson, B.A.

The increasing numbers of the body demanded  a move and the erection of the present building built on the corner of Stouffer and Main in 1874.

In the church the Christian Endeavor organization for young people was adopted early after the move. In 1892 successful jubilee services were held for the 50th Anniversary. In 1903 the church building and the parsonage was sold for $1800 and it became the Memorial Christian Church. Today, it is Stouffville Christian Church.