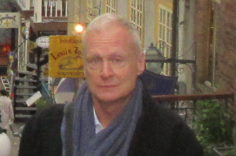 This year’s winner for the Media Ecology Association’s Marshall McLuhan Award is Stouffville resident B.W. Powe for his book The Charge in the Global Membrane.

He recently received the award at the MEA virtual convention in Brazil. The award is bestowed each year for the Outstanding Book in the Field of Media Ecology.

“My neighbours often ask me, What’s your book about?” Powe says.

“And I say, it’s about exploring the waves of mystery in our present, and finding its passion and poetry.”

Powe is a Canadian poet, novelist, essayist, philosopher, and a tenured English professor at York University. His classes on visionary imagination are popular.

Powe was chosen for his remarkably astute delineation of our technocentric world today, with its divisiveness, hostility, truth denial, conspiracy theories, and violence, both linguistic and physical. There are passages in this work of lyrical hope.

Street art and graffiti are the appropriate illustrations for this dystopic and utopian world in which democracy struggles to contain a rising tide of neo-fascism. Marshall Soules has selected suggestive imagery from his photographic collection of street art to illuminate aspects of this darkening and yet enlightening world.

“We’re experiencing the charge in the global membrane… By this I mean immersion in our electrified technological environment,” Powe says. “All the puns in charge implied. Marshall McLuhan was one of the first to recognize we’re wired up, transformed, wholly inside borderless, transnational, instantaneous, entangling, speeding, here-there-everywhere-now states, in an always intensifying mutable milieu.”

Powe is widely regarded as one of the original and unclassifiable authors in Canadian writing. He is the author of The Solitary Outlaw (1987), A Tremendous Canada of Light (1990), Outage (1995), The Unsaid Passing (2005), a finalist for the ReLit Prize, These Shadows Remain (2011), and Marshall McLuhan and Northrop Frye, Apocalypse and Alchemy (2014), Where Seas and Fables Meet (2015), and Decoding Dust (2016), among other titles. His work has also been featured in the New York Times and on CBC, CTV, CityTV and Bravo.

The Charge also addresses the music of Bob Dylan, David Bowie and Joni Mitchell; and it addresses the Net-Gens and talks to the young about the role of creativity, beauty, aspirations, and imagination in our time of instant webbing communiques.