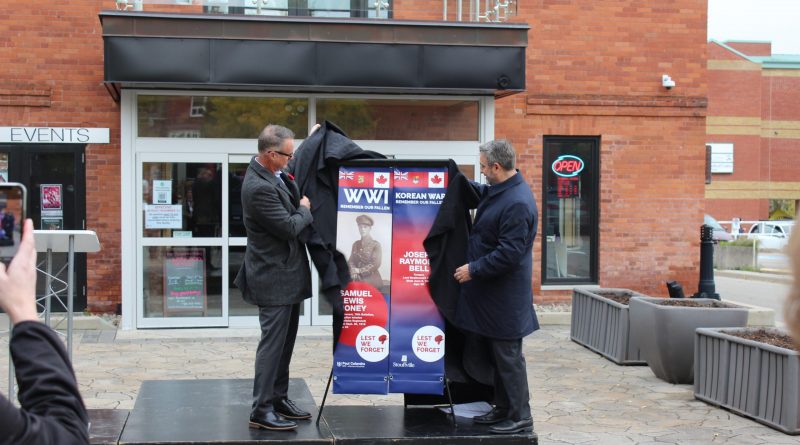 Twenty-four new memorial banners were recently unveiled at 19 on the Park in Stouffville by MPP Paul Calandra, Mayor Iain Lovatt, and representatives of Royal Canadian Legion 459.

The unveiling featured a partnership between Calandra and the town to honour all of Stouffville’s heroes who made the ultimate sacrifice in defense of Canada.

“Our Remembrance Day Banner Campaign gives Stouffville residents the opportunity to pause and reflect on the service of these heroes who made the ultimate sacrifice in defense of our liberty,” Calandra said.

In accordance with COVID-19 protocols, the unveiling took place in front of a limited outdoor audience. The new banners, which feature soldiers from local families who sacrificed their lives during World War I, II, and the Korean War, have been installed on Stouffville’s Main Street and will remain there until after Remembrance Day.

Calandra began the Remembrance Banner Project in 2014 when serving as Member of Parliament and has continued it as MPP with the support of the Town of Whitchurch-Stouffville, which has jointly funded the banners, and Royal Canadian Legion Branch 459.

“I commend and thank Minister Calandra for his continued efforts to recognize and honour the heroes of World Wars I and II who came from Whitchurch-Stouffville,” Lovatt said. “The sacrifices of these brave men and women should never be forgotten and these banners will ensure that their legacy lives on.”

The new banners will be displayed in addition to the banners first displayed in 2019 and 2020 honouring Canadians killed in World War I and II.

“These banners are a reminder of the incredible sacrifices which made Canada all that it is today,” Calandra added. “They are a reminder of our strengths and all that brings us together as a nation. I hope everyone takes time to visit Main Street Stouffville and pay their respects to our fallen local heroes. We must never forget.”