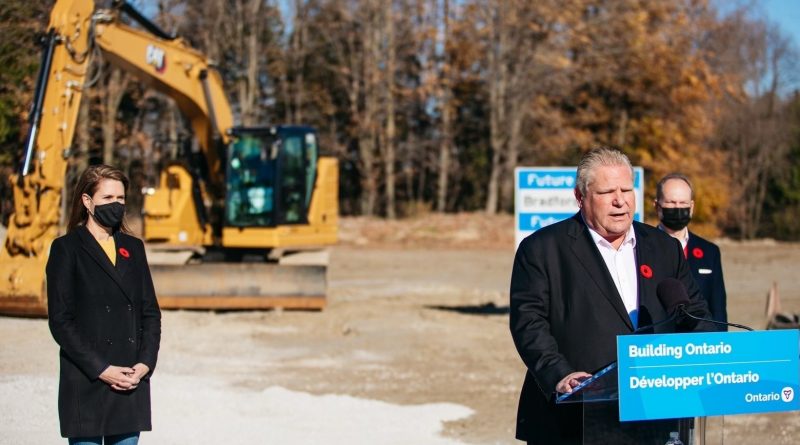 The Ontario government is taking another step toward relieving gridlock by advancing planning for the Bradford Bypass, a new four-lane freeway connecting Highway 400 and Highway 404 in Simcoe County and York Region.

The province says that both regions are expected to experience rapid growth over the next 10 to 20 years and investing in this new corridor is required to ease congestion on Highway 400 and existing east-west local roads.

“With both Simcoe County and York Region expected to grow at incredible speed, building the Bradford Bypass is a no-brainer,” Premier Doug Ford said. “Delivering on this and other important infraAstructure projects will create good jobs, help stimulate our economy and reduce highway congestion as our government delivers on our mission of building Ontario.”

The government is building Ontario by putting shovels in the ground for highways, hospitals, housing and high-speed internet in communities across the province. This is how Ontario is creating the conditions for long-term economic growth and job creation.

“Historic transportation infrastructure investments, like the Bradford Bypass, will move people faster, get goods to market quicker, and reduce greenhouse gas emissions resulting from bumper-to-bumper traffic,” Transportation Minister Caroline Mulroney said. “The Bradford Bypass will set up local families and businesses for success by not only easing congestion that already exists, but also unlocking housing opportunities and job creation in the region, securing Ontario’s growth and prosperity for generations to come.”

The province says this project will build Ontario up into the future and is expected to support more than 700 jobs per year on average during construction and generate more than $70 million in annual real GDP. Motorists and trucks are anticipated to see more than a 60 per cent savings in travel time when using the new freeway compared to existing routes along local roads, which will save up to 35 minutes.

The government has invested approximately $2.6 billion in funding for 2021–22 in support of the Ontario Highways Program, which features more than 580 expansion and rehabilitation projects including the Bradford Bypass.

The proposed highway will extend from Highway 400 between 8th Line and 9th Line in Bradford West Gwillimbury, will cross a small portion of King Township and will connect to Highway 404 between Queensville Sideroad and Holborn Road in East Gwillimbury.

A Preliminary Design and environmental assessment in accordance with Ontario Regulation 697/21 for the project is currently underway and is expected to be completed by December 2022. The province says it is committed to ensuring environmental impacts are assessed and mitigated in an open and transparent manner in accordance with the streamlined planning and assessment process.