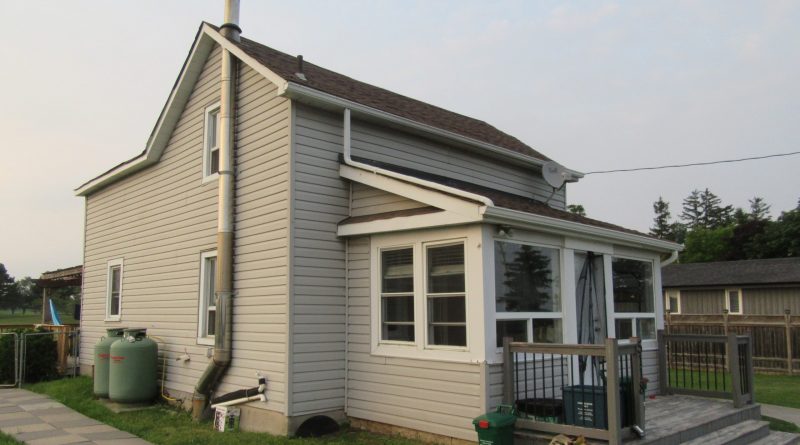 This small Ontario vernacular home located at 5118 Stouffville Road reminds one of the “Little House on the Prairie.”

It is located with a large open lot which is very visible as you drive by. This home once had grey insula-brick (1994) but has been upgraded to new grey siding.

The simple gable roof brings to memory the early building designs. The 1-½ story has had some additions over the years.

It has been noted the front porch was added and enclosed in 1942. There is an addition to the east. There was an early addition to the rear of the house to the north. Upon a detailed view, you may also see the centre chimney which likely was the source of heat.

The windows are single glazed double-hung. The front door has the look of a 1960s design with windows in the door.

The north side of Stouffville Road was known as Lot 1 Concession 7 Whitchurch. This 200-acre farm belonged at first to George Faukler (Fockler) Sr. who had settled here by 1802.

George received the land from the Crown after fulfilling his settlement duties. The intersection of Stouffville Road (called the town line as it was the line between Markham Township and Whitchurch Township) and the 8th Concession (known now as Highway #48).

This crossroads was an important one. At one time there were two general stores in this community. The Bible Christian Church located west of this house was once closer to the road. There is a large parcel of land between them.

The village of Ringwood began to grow around 1860 and the first ½-acre lots were sold for shops and homes. On the southwest corner, Newbury Button had his Ontario House Hotel which opened 0n Jan 30, 1868. On the northwest corner, just a bit east was Samuel Fockler’s Hotel known at one time as Revere House. It was established c. 1850 and then dismantled in 1957 when Highway 48 was widened and realigned.

The Fockler family have deep roots and many generations are connected to this hamlet. There are Focklers still to this day living in Ringwood.

This house once was the home for Hugh Fockler. He was the son of Samuel Fockler and the great-grandson of George Faukler (Fockler). Hugh was born and raised, and eventually died in 1941, on the same property. Hugh and his wife raised eight children in this home. This would explain the rear extension for added space.

The next resident was his son, Joseph A. Fockler. Joe and his wife Lulu purchased the home on Dec. 6, 1941 from his great-grandmother, Sarah Fockler.  The home was once located in the centre of the one-acre parcel which has now been divided into two parcels. A modern bungalow was added next door for another Fockler family member.

It should be recognized that the history of this hamlet is well connected to the Fockler family now in the seventh generation still living in the community. There are many remembrances and other family connections through marriage, church functions and family dinners.

Photo: This small Ontario vernacular home located at 5118 Stouffville Road reminds one of the “Little House on the Prairie.”