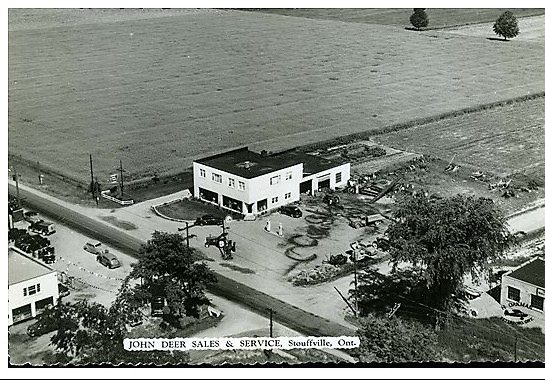 The first mention of the Giles dealership was in its 1960 Stouffville Tribune advertisement.

The options for the vehicle were quite different than what is available today.

Before this local shop became Giles it was built April 3, 1947, by Fred E. Byer of Atha who was a John Deere farm implement dealer.

Byer had moved into Stouffville from Claremont. He had sold his 122-acre farm and had a large auction sale. He had purchased the site just west of town for a salesroom and residence and expected to build shortly after he got materials on the ground.

The land records mention the lot was part of Whitchurch Township as it was outside the boundaries of the Village at the time. This would mean the application would be sent to the Whitchurch council for consideration.

His farm was located midpoint of the 100 acres. The small corner which Byer had purchased for $696 was located in the south-east corner. It was later the corner of Fairview and Main St. before the realignment of the Ninth Line a few years ago.

The town was growing westward so he estimated he was right in the line of traffic. The village council had decided the future commercial properties would be best located here along the main road just on the edge of town.

Some longtime residents may recall the gas pumps in the front of the showroom. In the summer of 1952, Byer decided to spruce up his large premises in the west end with a complete new stucco job. The work was done by W. J. Haley and assistants.

The next big change that happened was when Walter Taylor Motors held a grand opening of the new car agency. It was temporarily located in the Fred Byers building. Here the new Chevrolet and Oldsmobile models were shown. By 1958, a new name was leasing the site, “Bourne-Hunter Motors.”

Byer continued his John Deere Implement Agency for a short time. There was no connection between the two businesses. Each had their own service departments.

The Fred Byer building at the west end of the village was completely refinished in white clapboard by Bud Spang construction. The premises soon after became the location of Giles Chevrolet Oldsmobile.

In 2016, Giles decided closing shop was a better option than spending the millions needed on an expansion being dictated from General Motors.

The site at Main Street and Ninth Line is now for sale for future redevelopment.

By Susan Cork, Local Journalism Initiative Reporter The Future of Stouffville: A plan to upgrade the GO Line to LRT