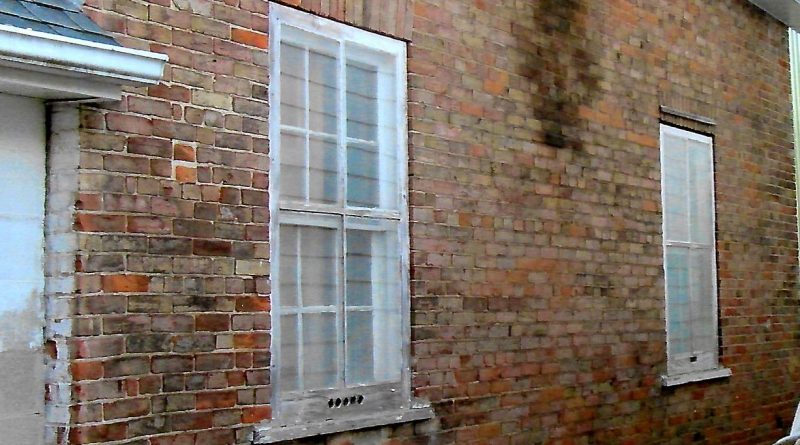 Hidden down a small driveway/lane is a small brick house. It is a rear addition to 6343 Main St.

The store front most residents will remember it as is the Stouffville Florist.

It was originally a harness shop for Mr. Augustus Von Buseck. This early building is on one of the first on maps of the Village of Stouffville. It is located in Plan 51, block “B” lot #2, formerly in the Township of Markham.

If you were to look for it on Main St. the storefront is on the south side of Main just east of the Clock Tower.

Augustus Alexander Fridolin Rudolph Von Buseck — born in Alten, Buseck, Germany on April 5, 1818 — is an important figure in the history of Stouffville.

Prior to living on Main Street in Stouffville, he resided on Lot 16 Con 7 in Markham Township which is now the north side of 16th Ave. This is where he had a shop for his business before 1850.

In the census it shows that he had a vibrant business employing six men. One of those young men was his brother-in-law, Eli Wismer age 21.

The first child was born Nov. 22, 1846 and only lived for just two years, six months, and eight days.

Together they had six children: Charles, Theodore, Amelia Anette, Eli and Mary Albertina. Charles died Aug. 31, 1849. He was the first burial in the Village cemetery, in the old part, section 1 Row G.

Eli was a brother to Nancy (Wismer) Von Buseck. Eli married Matilda Camphausen on March 8, 1859. They were the parents of three sons, Edward Augustus, Charles Albert and David Arthur. All three boys were born in the little red brick house on Main Street in Stouffville. The home is still standing after more than 175 years.

By time the 1861 census was completed, it shown Wismer, Eli a saddler living in a brick 1-story home. By 1866, Eli joined in the business venture as a full partner with Augustus.

Eli died young in 1871 at the age of 40. His wife Matilda then moved to Kitchener with her sons. Edward was a law student and Charles a store clerk.

Edward A. Wismer went on in Dec. 19, 1908 to be appointed a judge in Simcoe County. Matilda (Camphausen) Wismer was in her old age when she finally moved to live with her son Edward in Barrie. She passed away in 1915 at the age of 82.