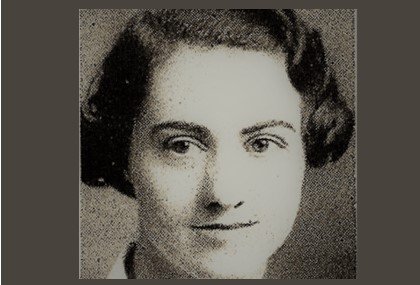 “Isabel Garden Lane,” is a street in the Reeves Way neighbourhood. I was curious as to who she was and her part in Stouffville’s history.

Isabel was born to Mr. A. E. Booth and his wife Leila (Brownell) they owned the farm just south of Stouffville School (now Summitview). Isabel was born in March, 1910. She had an older brother Winston and a younger sister Elizabeth.

The Booth family moved to Stouffville in 1918. The farm was down “College Lane” a street that ran past the school to the lands behind. The farm was 28 acres in total. Isabel would have attended the new school after the fire. She would have attended the Continuation (high) school here as well as they were both in the same building. Her teacher in 1920 was Miss Nellie Nichols. Isabel was listed as the top student. In her junior third year, she had Miss Huxtable and again achieved top marks.

Dr. Isabel Booth attended the University of Toronto in the Faculty of Medicine in 1937, she passed her fourth year. In June of 1939, Isabel graduated with honours. She also won the Silver Medal for her Faculty.

Dr. Booth started her practice in St. Catharines under the direction of a prominent child specialist in medical practice.

In the summer of 1940, Dr. Isabel Booth accompanied a patient from Algonquin Park to Toronto by airplane passing over Stouffville on the way. She was rushing a young female patient to Toronto for an appendix operation. Some questions come to mind, first what type of airplane did they use. Secondly, where did they land the airplane in Toronto? Some have suggested the Island Airport.

Dr. Isabel Booth became a specialist in pediatric medicine in 1947. It is thought that Dr. Booth was working at Sick Kids Hospital.

One family was very thankful for her dedication to children. The thoughts shared said, “Dr. Booth was so wonderful taking care of my three children from infancy. Dr. Booth saved my son’s life from an intestinal problem at birth. The Doctor will always be remembered with love.”

Dr. Isabel Booth passed away on April 5, 1981 and was laid to rest in Mount Pleasant Cemetery in Toronto. Her parents were previously interred in the same cemetery.