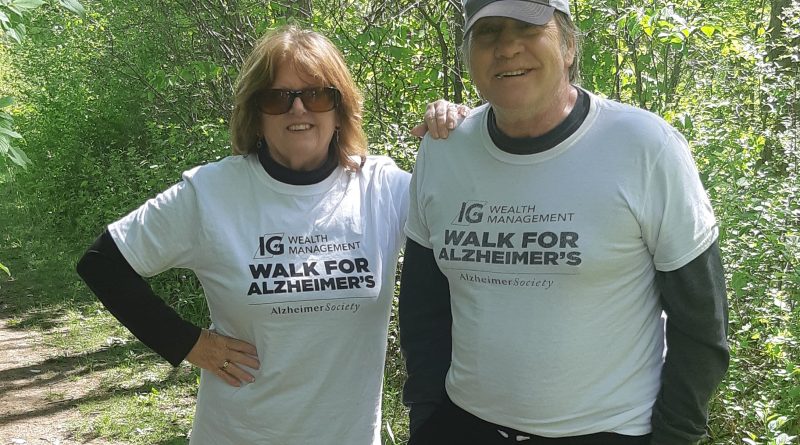 Dementia can be a lonely disease, but people who are impacted by it need to know only one thing – they are not alone.

The Alzheimer Society of York Region (AS York) offers programs and services to support both the person living with dementia (PLWD) and their caregivers, and it now has one new tool to help.

Hearts Linked by Courage, Honouring Loved Ones and Caregivers on the Dementia Journey offers 23 shorts stories written by 24 people impacted by dementia.

“Hearts Linked by Courage is a great book to have for many reasons,” said Markham resident Reshmi Chetram-Dave, who wrote ‘Love on Loop’ in honour of her mom, Deviekha, who passed away late last year after a battle with frontotemporal dementia progressive fascia. “It’s like having a community of those traveling the journey with you at any time you may need inspiration, motivation or a new idea.

“You can read from beginning to end, or even just decide to open the book to a random story. Some days…during what may feel like a dark time, you can grab this book, read a couple pages and hopefully you no longer feel alone. Consider it almost like always having a companion, who ‘gets it’.”

In ‘Love on Loop’, Chetram-Dave talks about her and her mom’s shared love of music and how after her mom’s diagnosis, “The music stopped. The flow was blocked; this track was cut,” she wrote in her story.

Chetram-Dave said she came to realize if she was paralyzed by fear, how was her mom feeling? Eventually, they found a new soundtrack in which to live.

Chetram-Dave said when she was asked if she would like to contribute to the book, she knew immediately she did and what story she wanted to share.

“I wanted to speak to both who she (her mom) was and who she was becoming and that regardless of the latter, she was still present, a source of light and that with an open mind and heart we could still enjoy this life and unexpected turn in the path.”

“The goal I had was to share a happy story that brought a little hope and surprise, that would make one smile,” Cliff said. “Dementia is so unpredictable and affects different parts of the brain, so when Randy can no longer perform an activity it just means there may be something else he can do. I want people to realize that.”

In ‘His Spark of Light,’ Cliff writes about how she and her grandchildren watched as Randy drew stuffed animals the children brought up from the basement. Randy, whose disease robbed him of speech, began to draw toy after toy, bringing joy to both Lori and their grandchildren.

“I enjoyed writing this story because it will make me remember this happy time because we all know as humans, we dwell on the sad times too often.”

Cliff said the Hearts Linked by Courage book is important for those on the dementia journey.

“For someone new on this journey, they may not want to read these stories if they were like me,” Cliff said. “However, if I had read these stories I may have seen a much brighter light and not feel so much in the dark. This book is filled with true life stories of people living with a disease that shows all the goods, the bads, the happys and the struggles.

“Overall, a great read for anyone willing to read stories that were written from many hearts.”

Chetram-Dave said it was therapeutic to write her story as a “source of reflection and release.”

But the goal of writing the story was to also let readers know that what they are feeling and experiencing is not unique; there are people who have been there and understand what they are going through.

By reading these stories, families living with dementia will understand that so many other people are having the same struggles and the best way to see a way forward is by hearing and learning from them.

Hearts Linked by Courage was published by I C Publishing out of Holland Landing and funded by the Carswell Family Foundation. Because of this funding, all money from the sale of this book will go to support York Region residents impacted by dementia.

Books cost $18.95 and can be purchased at bit.ly/ASYorkBook.

Photo: “The goal I had was to share a happy story that brought a little hope and surprise, that would make one smile,” Lori Cliff said. “Dementia is so unpredictable and affects different parts of the brain, so when Randy can no longer perform an activity it just means there may be something else he can do. I want people to realize that.”