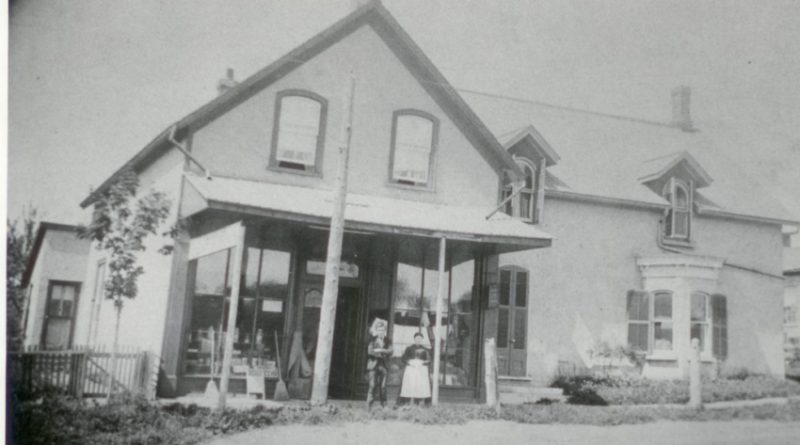 The long-time home of Joel Stock was located at 6480 Main St.

Joel was from a family of masons in England. It was a three-generation family business. In his younger days, he was known as a plaster. This likely had to do with parging of the masonry.

Joel was married in Somerset England on Nov. 21, 1847, to Harriet Wall

Joel, at the age of 33, immigrated to Canada in 1858 with his wife also 33 and a daughter age 7 named Mary (Maria). They had left Liverpool England and arrived in New York, New York on July 13, 1857 destination was York (Toronto).

This young family came to live in the village of Stouffville and first settled on the south side of Main St. Joel is listed as age 36 and his wife age 37 the daughter Maria J. (Mary) was age 13 they were living in a frame 1 story home.

This building on the northwest corner is located on the lot 28 Plan 230. Joel purchased the lot for $550 from James Johnston. It was only a ½ acre. On the same day Joel took a mortgage for $450 and within six years this was paid back.

Joel and his wife were business people. Joel was a mason, listed in the York County Directory in 1866, Stouffville. His wife ran a millinery and dry goods store.

Mrs. Charles Perry came to the Village of Stouffville as a new bride in 1876.  She only knew one person that being old Mrs. Joel Stock who lived near Baker Ave. in the east part of town. Mrs. Stock had lived there for over 60 years, (1870). Mrs. Stock was beloved by the whole community.

The wedding day was a great celebration on Sept. 25, 1873, in the Congregational Church. Mr. D. D. Nighswander and Mary J. Stock, daughter of Joel and Harriet Stock, were united in marriage. The minister was Rev. B. W. Day. Mary was 25 and David was 26.

Fred Nighswander became a painter and decorator in Stouffville. He resided with his grandparents at this location. The store became known as Nighswander’s Paint Shop. The historic photo shows Fred and Mrs. Stock in front of the store.

Photo: The long-time home of Joel Stock was located at 6480 Main St. Photo courtesy of the Whitchurch-Stouffville Museum and Community Center, #988.014.202.