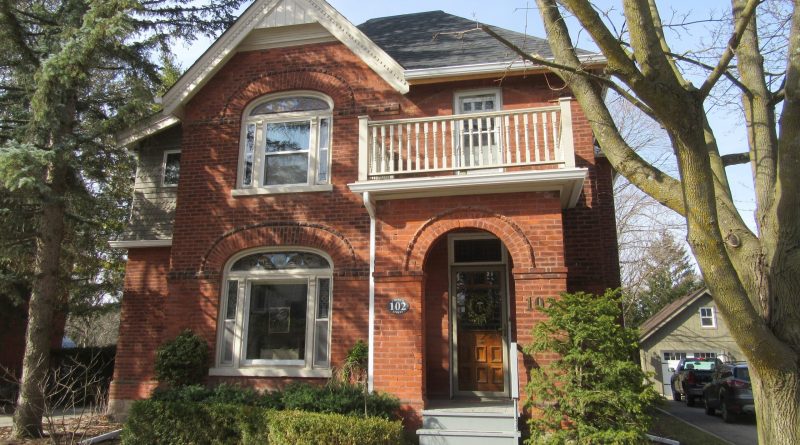 The beautiful solid red brick home at 102 Church St. has had many citizens and visitors over the years.

Much activity has happened over the life of this structure. We seldom think of a building as having a life, but it does have a few stories to tell. The homes also get older just like the residents.

The building was built in 1894 by, and for, Nathan Forsyth a contractor and builder in Stouffville at the time.

Forsyth had purchased the lot for $150 on July 5, 1893. He had just finished erecting the massive Methodist (United) Church the year before. Many of the church elders and deacons at one time lived on Church St.

The idea to change the “old” manse on Main St., to this location was partly due to the sale by Forsyth to the Methodist Church Board.  The price was $3,000 in 1903.  It remained as the parsonage until 1973.

The ministers used the home for such church business as Ladies’ Mission meetings, Men’s Bible Studies and other social events. The parsonage was also a quiet place for a small intimate wedding. There is a long list of local couples tying the knot at this home but that is another story.

This house is a vernacular village residence designed with the influence of the Queen Anne Revival and Romanesque Revival styles. Romanesque Revival which speaks to the Roman arches in the front entrance and to the shape and size of the building. It has a square profile and is a full 2-½ story in size.

The choice of materials is deep red brick, which tells us this was a preference for Nathan Forsyth. Another design detail is the front elliptical arch windows with a stain glass transom which was a Forsyth choice as well.  The corbelling of the brick with the voussoir highlights accent the windows at front of the house.

The front door would be called a cottage door because of its glazed upper portion. Upon a closer look, the recessed entrance door is decorated with six moulded panels on the lower half. A large leaded glass pane is surrounded by smaller beveled glass pieces.

Across the top, there are three glass panels like a divided transom. The old-style front door ringer is centred. The knob and handle have the aged bronze look with a large keyed plate.

There is evidence of changes as the upper portion of the front porch has been upgraded to a new railing in keeping with the style. The old post markings are on the brick wall. The south wall reminds one of the Arts and Crafts style with the shaped cedar shingles. Looking even higher above there is a gothic window detail.

As this part of Church St. was registered as Plan 63, the road width was widened to a comfortable 50 feet. Previously in the southern part, it was 33 feet based on half a chain (66 feet). This lot fabric included 20 new lots being sold at different times over the next few years.

One thought on “102 Church Street”