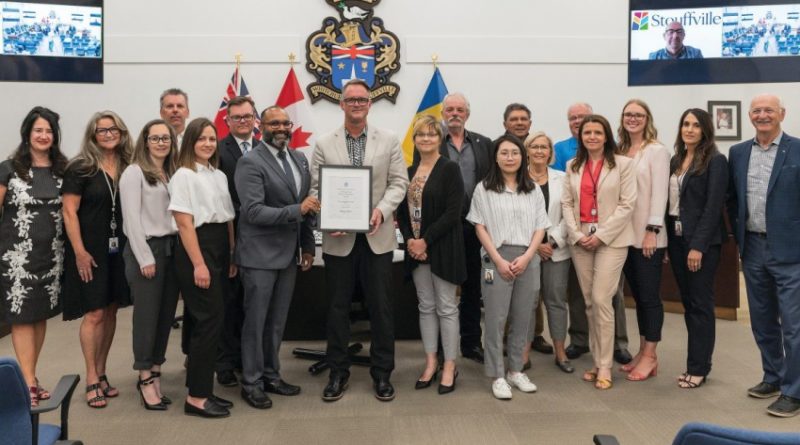 Town of Whitchurch-Stouffville staff in the finance department and office of the CAO’s communications division were recently acknowledged for their hard work and dedication which led to the town being honoured with two prestigious awards.

The finance department was awarded the Distinguished Budget Presentation Award from the Government Finance Officers Association (GFOA) for the 2022 and 2023 Operating and Capital Budget.

The GFOA award is the highest form of recognition in governmental budgeting.

“We are honoured to have received this award,” said Jeremy Harness, Stouffville’s director of finance. “I am proud to be part of such a great team.”

According to GFOA, in order to receive this award, a governmental unit must publish a budget document that meets program criteria as a policy document, a financial plan, an operations guide, and as a communications device.

According to Harness, the comments received by the judging panel were exceptional, and many criteria were judged to be “outstanding.”

The GFOA’s congratulatory video message can be found at bit.ly/3aWUbSn.

Included in the Platinum recognitions, is the town’s first-ever ‘Residents Guide.’

“The 2022 Residents Guide was a vast undertaking involving many departments and individuals,” said Glenn Jackson, manager of corporate communications.  “From a production standpoint, it is heartwarming to have such dedication and hard work recognized.”

The town also won a Platinum award for the same “2022 and 2023 Operating & Capital Budget” that won the GFOA award.

Also receiving Hermes awards are the Whitchurch-Stouffville Library’s 2022 Spring Guide, the September 2021 issue of On the Road magazine, and the town’s 2021 Year in Review.

“The production of the award-winning publications takes hours of hard work by many, many people,” Jackson said. “Everyone in communications, finance, marketing and economic development, as well as at the library, deserves many kudos for their outstanding work.

“We very much appreciate council’s recognition of our work.”

This marks the third time Hermes has recognized Stouffville staff with creative excellence over the past five years.

Main photo: The Town of Whitchurch-Stouffville finance department was awarded the Distinguished Budget Presentation Award from the Government Finance Officers Association (GFOA) for the 2022 and 2023 Operating and Capital Budget.