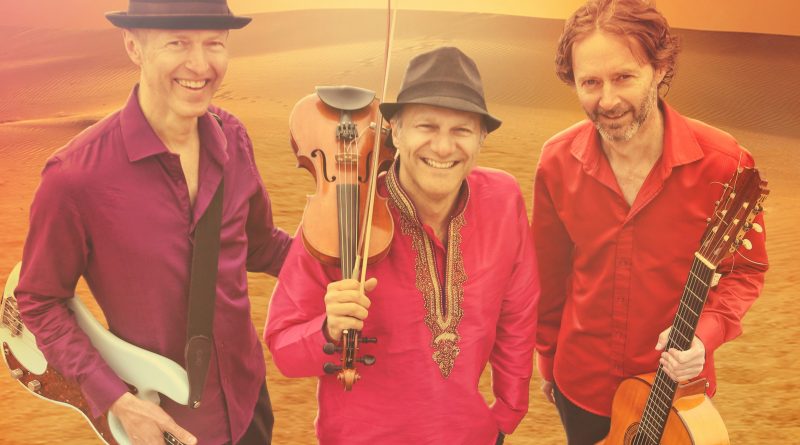 Three-time Juno nominees and Billboard charting Sultans of String are set to raise the rafters with their wickedly eclectic and globetrotting Livestream on October 16, at 7 p.m.

Celebrating a milestone 15 years together, Sultans of String’s music has hit #1 across Canada on Top 10 national radio charts, #6 on Billboard (World Music chart), top 10 on CMJ (World), and received multiple awards and accolades, including 1st place in the ISC (out of 15,000 entries), three Canadian Folk Music Awards, a Queen’s Diamond Jubilee medal (for bandleader Chris McKhool), plus invitations to perform/record with such luminaries as The Chieftains, Grammy winners Sweet Honey in the Rock, and Richard Bona (Paul Simon, Herbie Hancock).

McKhool (Jesse Cook, Pavlo) has an Egyptian-born mother who happened to play piano, teach classical theory, and feed her young son as much Middle Eastern cuisine as she did music lessons. From there, the powerful violinist developed a taste for multi-genre string sounds and found a like-minded crew of all-world enthusiasts. When he first heard founding guitarist Kevin Laliberté’s (Jesse Cook) rumba rhythm, their musical synergy created Sultans of String’s signature sound – the intimate and playful relationship between violin and guitar. From this rich foundation, the dynamic duo grew, featuring such amazing musical friends as in-the-pocket bass master Drew Birston (Chantal Kreviazuk).

The band’s US manager and acclaimed promoter Dave Wilkes (Bela Fleck, Emmylou Harris) states, “Over the decades, I’ve worked with numerous top ten and #1 Billboard artists. In all that time, I have not worked with composers more talented than McKhool and Laliberté from Sultans of String. Not only are they a superb writing team, they are also amazing arrangers and performers.”

Sultans of String have been criss-crossing Canada, the US and UK for the last several years at many taste-making forums such as JUNOfest, NYC’s legendary Birdland and the Lincoln Center, and London’s Trafalgar Square. They recently sold out Koerner Hall (Toronto’s Carnegie Hall), and performed with Toronto, Vancouver, Edmonton, Stratford, Ontario and Niagara Symphony Orchestras, as well with Kingsfield POPS in Maine and Maryland’s Annapolis Symphony. Sultans of String were filmed by CBC’s Canada Live, MPBN’s Maine Arts! , and have performed live on BBC TV, BBC Radio, Irish National Radio, and the internationally syndicated shows WoodSongs, World Cafe, and on SiriusXM in Washington.