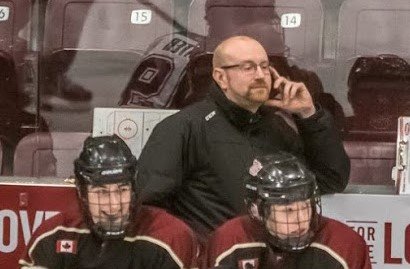 The Stouffville Spirit has a new bench boss.

The Peterborough resident brings a wealth of experience from the OJHL, minor hockey and the player representation business to Stouffville.

“Scott checked off all the boxes,” Spirit GM Ken Burrows said. “The teams he’s coached have all overachieved. He knows the OJHL and understands that this is a development league first.”

“Scott has worked well with players at both ends of the spectrum at this level, the 16 and 17-year-olds and those who are 19 and 20. That’s not easy to do.”

Donato’s connections with universities and colleges at all levels was also important, Burrows said.

Donato, 40, was Director of Hockey Operations for the Pickering Panthers the past two years. The Spirit and Panthers were scheduled to play for the 2019-20 OJHL North Division title before the league was shut down by the COVID-19 pandemic a year ago.

“Plus, this is a team built to compete this year,” Donato said. “And for me, personally, it’s a great opportunity to take my coaching to the next level.”

Donato coached the Petes major peewees to the 2020 OMHA quarterfinals before COVID halted the playoffs.

Donato’s initial duties in Stouffville will include meeting with the returning players – virtually – and appointing his assistant coaches.

Donato was a family advisor/player representative with the Millen Group for five years (2011-15), helping more than 50 players get commitments to NCAA and U SPORTS schools.

“Scott has turned around three age groups in Peterborough, taking them from losing records to OHL Cup berths,” said Hallyburton, who has known Donato since 2010. “Cory Stillman was his assistant coach with the ‘98 age group and is now coaching with Arizona in the NHL. Scott has my complete trust in his ability to make us perennial contenders.”

“The X factor with Scott is his connections with the top NCAA programs, where he has sent countless players in his years as a player agent and family advisor. Our players will be promoted to these programs like never before.”

Burrows admits there are several “unknowns” ahead of the 2021-22 OJHL season, including the status of some players who may opt to attend university or college over returning. A solid class of new recruits has committed to Stouffville.

Team officials hope to host team workouts and skating sessions beginning in June, with the approval of provincial and regional health officials.

Rookie camp would precede main training camp, both in August.