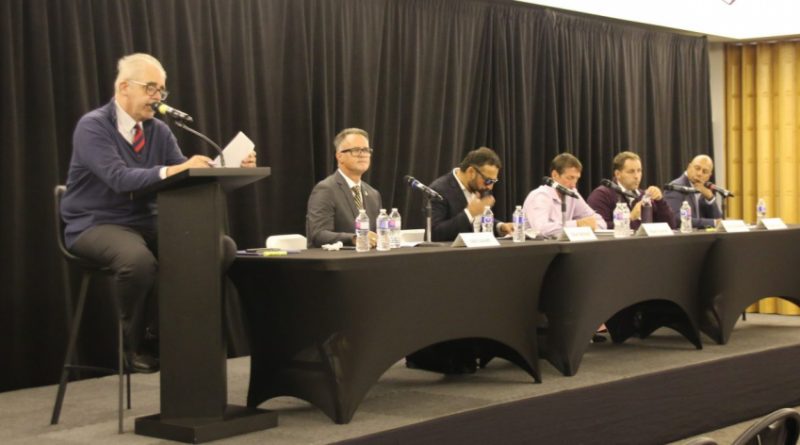 Some may have expected an off-the-rails yell-fest at the mayoral debate hosted by the Stouffville Chamber and Library October 5th at Spring Lakes. But thanks to a controlled debate that saw well-known local personality Jim Mason asking all the questions and wisely, no live questions from the floor, the event was relatively sedate.

The full house did, however, get a more fulsome look at the roster of candidates vying to run the town as mayor and also had a chance to mingle with ward candidates prior to the main event.

But anyone who came to the debate expecting to get specifics from mayoral hopefuls on what they would do if elected might have been disappointed, partly because some candidates seemed to have nothing to offer beyond promises to do better and partly due to responses to questions being contained to one minute or less.

Former mayor Justin Altmann made sure he made use of the limited time and was most inclined to up the temperature of the debate with some fiery pre-prepared notes that were squarely aimed at current mayor Iain Lovatt’s record. They were not complimentary. Among other jabs, he voiced his opposition to the sale of town facilities like Soccer City and drew attention to legal wranglings around a developer’s intent to buy Bethesda Sports Fields that was rejected by council.

Altmann also proposed to move town hall if elected and make use of the Sandiford address to create affordable housing and recreational facilities.

Lovatt deliberately avoided taking Altmann’s bait choosing to focus on his record in office including the dramatically increased commercial development applications, that the town needs to lessen the tax burden on residents, during his tenure and an assurance that a new domed facility for soccer would soon replace the much-maligned Soccer City.

Anand Daté gleefully jabbed at both Lovatt and Altmann’s time in office and injected some welcomed humour. And while there were a few wild swings during the debate there were no knock-out punches.

One thought on “Some sparks but no wildfire in mayoral debate”