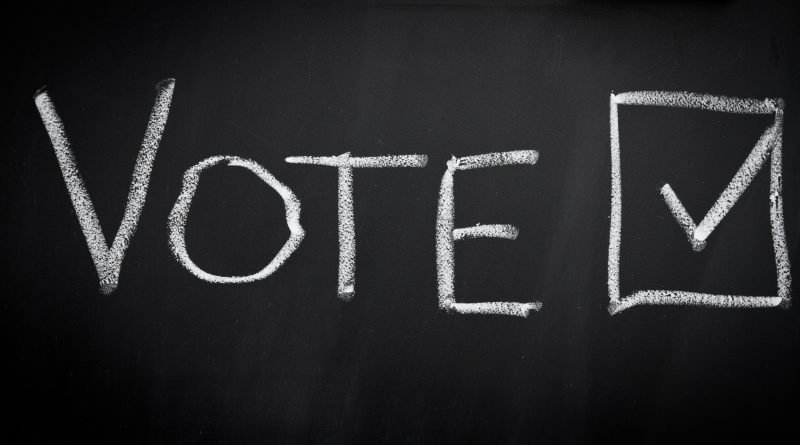 The gloves are off, and as you read this, candidates for municipal council, mayor and school trustees are knocking on doors, updating social media, building web pages, glad-handing at dinners and honing their policy chops. All in the hopes that you will entrust them with your vote.

Running for office is a thankless job sometimes but an important one as municipal political issues are the ones that arguably effect us most on a day-to-day basis. But, although some respect should be given for anyone who steps up and runs, the reality is that some are more worthy to represent us than others and it’s up to you to decide who they are come this October 24.

In service of that important task, here is a look at some of the key town battles going on this fall.

There was little doubt that current mayor Iain Lovatt was going to run again. He was one of the first to register back in June of this year for the municipal elections to be held on October 24, content that his record over the last four years would serve as a solid base for re-election.

What was in doubt was who would run against him. But after a dramatic pause in registrations, a last-minute whirlwind in the week before the noon, Aug. 19 deadline finally yielded four competitors.

Among those is Anand Daté who will have a second go at the mayor’s chair. Daté, a community activist who is chair of the Whitchurch-Stouffville Food Bank, is involved in a number of organizations including on the board of the Stouffville library.  He presents himself as a problem solver and has interestingly advocated for higher pay for town councillors making it clear to all that the job should be compensated as a full-time role with a living wage. Currently salaries of under $50,000 per year.

Most intriguing is the contemplated return of Justin Altmann. The former mayor is a polarizing figure who presided over a highly publicized and turbulent time on council and at town offices preceding the 2018 election that brought Lovatt to office.

Altmann, not surprisingly when asked, takes issue with current mayor and council’s initiatives and promises to retract all salary and car expense increases, re-instate summer sittings of council, review land sale policies and opposes the loosening of any Greenbelt land restrictions and council’s endorsement of provincial MZOs. But he does support some current development being executed and considered including entertainment facilities and health-centred services in the Hoover Park area development lands.

His goal, he says in a statement sent out to various media, is to “protect and enhance our community’s quality of life by instilling faith, hope, vision for a prosperous future with the residents in control of our destinies.”

Lovatt only hints at Altmann-era when asked about why people should continue to support him with their vote this time around.

“Experienced, proven leadership as mayor is required to work collaboratively with council and staff from the town and the region, with community groups and other levels of government to deliver results for the residents of Whitchurch-Stouffville. That is why I am seeking re-election to remain your mayor for another four years,” he said.

Lovatt sites a need to open “some” greenbelt land for development in Gormley and touts his determination to open more affordable housing options like one that recently broke ground on Main St. east of the Metro grocery store that is being built in cooperation with Housing York, York Regions housing corporation.

“I want to assure you that this is a job that you cannot learn on the job,” he says referring to his time on council as well as in the mayor’s chair. “This isn’t the time to risk the gains we’ve achieved over the last four years with a new leader,” he adds. “Our future is bright Whitchurch-Stouffville, and the best is yet to come.”

Mark Carroll, who worked for the town as an arborist and was once elected to council elected in 1997, will also contest the race as will Sher Ahmad.

The western, rural ward has doubled in size, amalgamating with what was Ward 3 in the last municipal election. With long-time Ward 1 councillor Ken Ferdinands opting to retire from council, the path for sitting Ward 3 councillor Hugo Kroon to take over the whole area seems to be set.

The twice elected, tell-it-like-it-is Kroon has shown himself to be a knowledgeable advocate for his constituents and has made commercial development in Gormley area a priority throughout the last term and has indicated this will still be a focus ongoing. This includes cajoling the provincial government to open up bits of the greenbelt lands along the 404. While the bulk of current council has endorsed this much-needed development, there have been critics.

Michael Cleverdon, a local businessman in the print industry who has positioned himself as an advocate for rural broadband access, has stepped up to challenge Kroon as has Juliette Deonarain, a business owner who is running on a platform highlighting more transparency on council, lower taxes and better services for seniors. 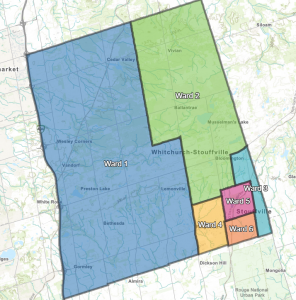 Incumbent Ward 2 Councillor Maurice Smith is running again to consolidate his position with a third plurality in the largely rural ward that includes Musselman’s Lake and Ballantrae. Earning 72 per cent of the vote last election, it might be a tough go to oust the veteran, but Cedar Beach fixture and business owner George Karpouzis is going to try. He is the only person to contest Smith’s current role.

Karpouzis is running on a platform that includes “road safety and traffic calming, transparent and accountable representation, fair taxation, and increased town services” which, Karpouzis adds, includes better use of the Ballantrae community centre and more sidewalks. That platform roughly mirrors what Smith has presented.

Presumably, Karpouzis takes issue with Smith’s efforts on what is an agreed-on slate of issues saying his goal is to be “transparent and accessible, and more receptive to the needs of the community.”

Smith argues it is precisely these traits that have served his community well during his tenure and should do so in the next term.

This ward is a toss-up with no incumbent as the current Ward 3 has merged with Ward 1 to create the large rural ward on the west edge of town while the new ward 3 defines the lower eastern edge of town.

Mike Humphreys came a close second to current Ward 5 councillor Richard Bartley last election and is looking to build on that support this time around running on a platform that highlights his desire to be a “constructive voice on council,” along with bettering infrastructure and building a “town of the future”.

In a conversation with the Review, Acton repeated his desire to be a conscientious listener and advocate for the town that he grew up in saying “no matter where life took me, and it took me a lot of places, my roots have always been in this community” adding “ I want to give back.”

He also emphasizes his desire to keep Stouffville a safe community, and to bring responsible commercial development to alleviate the tax burden on residential taxpayers. While he is not specific about any particular development project he would support, he says he will take guidance from experts that includes those in the town offices on a project-by-project basis. “That’s why we have them there” he notes adding that in addition to listening, cooperation with and respect for town staff will be a hallmark of his term if elected.

Incumbent Rick Upton looked to be the lone registrant in the ward race until a dramatic last-minute rush of registrants decided to take the plunge and take on the current councillor who won last round with a healthy 56 per cent of the vote.

Upton has been vocal about the need to increase commercial development and has focused his efforts on that to some success and also community safety which he stresses is a key ward issue.

“Speed, speed, speed,” he says when asked what concerns him. To that end, he has crusaded for better road structures, reasonable speed limits and more enforcement – especially on the central east-west corridor of Hoover Park.

Brad Valentini, Daniel Zeraldo and Keith Singer will contest Upton. At time of publishing, there was scant information on platforms, websites or even social media presence available for each of the challengers. Keep googling over the next month or hope they come by your house door knocking to see what they offer.

Last time around this ward was one of the most heavily contested with six people vying for the councillor role. This time only two will battle.

Sitting councillor Richard Bartley, a well-known veteran of council and the auto industry has touted his ability to work productively with staff and council to get things done. He has also been a strong proponent of commercial development in town along with other members of council who note that residential taxes alone will not satisfy the service needs of the town.

Challenger Laura Cusack is the founder of Hummingbird Hub, a non-profit group that looks to “develop programs to help fill some of the gaps in Stouffville, to build lasting social change in our fast-growing community”. The focus of her campaign is on social supports and programs in her platform rather than nuts and bolts, commercial development and physical town services. This distinguishes her from many in the municipal races and what she hopes will draw support to her campaign.

This promises to be one of the most interesting and potentially heated races in Stouffville as two well-known rivals will face off once again as former mayor and current councillor Sue Sherban will face off against former long-time ward councillor Rob Hargrave.

The race was close with only 135 votes separating the two who will both run on their formidable records.

Sherban has positioned herself as an advocate for the environment and has sometimes served as a forceful voice of dissent on council especially with regards to opening greenbelt land to commercial development in Gormley and has not been afraid to be critical of the province’s use of MZO’s (Ministerial Zoning Order) which allows developers to by-pass municipal approval processes. Road safety ad traffic calming has been a key issue specific to her ward that she continues to champion.

Hargrave too has never been one to back away from tough issues and has been bold in his opinions on council over the years. He has been notably, and uncharacteristically, quiet to date in the campaign with little social media or other publicly available material.

Angel Freedman, a social worker rounds out the field campaigning on similar issues to Sherban including environmental responsibility, job development and affordable housing.

Aside from candidate visits or a good Google search, stouffvillevotes.ca is a good source of candidate information that includes contact information including email addresses, website and social media information (if provided upon registration) as well as voter and donor information.

A mayoral candidates’ debate is being hosted on October 5 from 7-9 p.m. at Spring Lakes Golf Club at 4962 Stouffville Rd. with a chance to mingle with councillor candidates beginning at 6 p.m.

Get out and vote. Your community is depending on you.