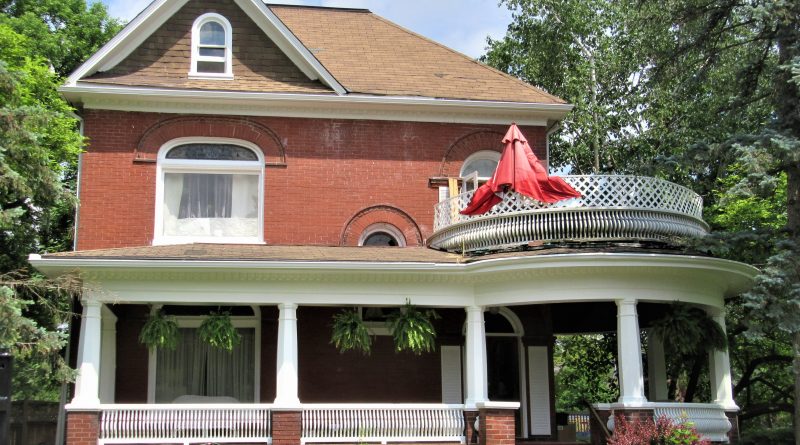 Stouffville saved its first heritage home at 6082 Main St. The Jacob Heise House was located on a large portion of land including Lots 29, 30, 40 and 41.

This house had a brick coach house in the rear yard which has been converted and added to over the years. The main house is a landmark and well-remembered by many in the village of Stouffville. Some of the town folks will call it the Brillinger House as this family lived here during the Second World War, in 1942.

This large two-and-a-half-story red brick home has some very attractive architectural details. The squared granite stone foundation exemplifies the craftsmanship and detail work of the stonemason. The eye-catching huge round porch with an upper balcony draws attention to the structure.

The windows have elliptical arches and stain glass transoms which add to the beauty of the home. The truncated rooflines create a pyramid shape with a flat top. There are also three large gables in the roof design. The front door has a split design that dates it back to the early days of similar homes. This home occupies two lots on Main St. and part of a rear lot as well.

Mr. Jacob Heise was married to Harriett Neal on May 25, 1885. They had a son Duncan born in 1888 and a daughter Enna born in 1907. Jacob was in the planning business in 1903 (where Schell Lumber is now located). Jacob appears on the fire map of 1910 as the owner of the planning mill. During the First World War, Jacob served on the school board.

In 1976, Mayor Gordon Ratcliff and councillors June Button, Eldred King and Becky Wedley formed a heritage committee whose purpose was to review the destruction of architecturally and historically important buildings. The plans were submitted at the time for new buildings 15 feet from William St. and 25 feet from Main St. A total of 24 parking spaces were also proposed.

The town’s interim official plan at the time suggested the formation of a Local Architectural Conservation Advisory Committee. The official plan went on to say, “shall endeavour to prevent the demolition of all buildings of architectural and/or historic interest and shall actively encourage the conservation and where necessary the restoration of these buildings.”

It appears that the same type of application is now on the books for a large development just a few houses to the west in the same heritage neighbourhood. I hope to see Mayor Lovatt follow in the steps of Mayor Ratcliff and begin to be proactive in saving the old village of Stouffville.

There is work being done to show off the details that have been hidden behind the large trees near the porch. A new coat of paint does wonders to bring back a clean and vibrant look and restore this home.

The pride in owning a piece of the town’s history ties the community together. This is a special home in a special neighbourhood.

Photo: Stouffville saved its first heritage home at 6082 Main St. The Jacob Heise House was located on a large portion of land including Lots 29, 30, 40 and 41.