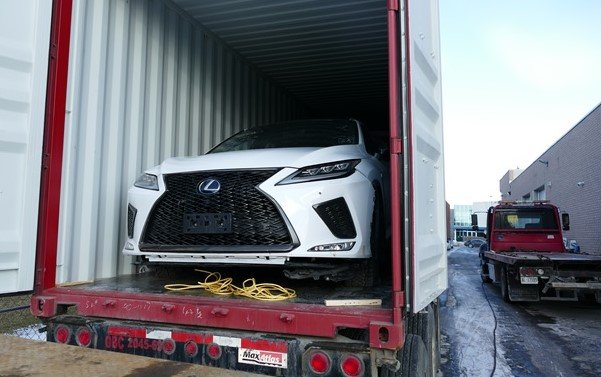 The project focused on thefts of Lexus, Toyota and Honda sport utility vehicles that occurred throughout the Greater Toronto Area (GTA).

On March 16, following a two-month investigation, investigators executed eight search warrants across the GTA and in Brossard, Quebec. Seventy-three stolen vehicles were seized, with a value of more than $4.5 million. Charges include Conspiracy, Trafficking of Property Obtained by Crime and Theft of a Motor Vehicle.

Investigators identified a criminal syndicate responsible for stealing high-end vehicles from residential driveways across the GTA. The suspects would enter the vehicle and reprogram the ignition computer, allowing it to be driven away utilizing a new key. The vehicles were driven directly to the Port of Montreal or loaded into a sea container in Toronto and transported to Montreal by rail. The containers were then loaded onto ships and delivered to buyers in Africa or the United Arab Emirates.

A video from the investigation can be found here: https://youtu.be/7iuKvIsIl0Q