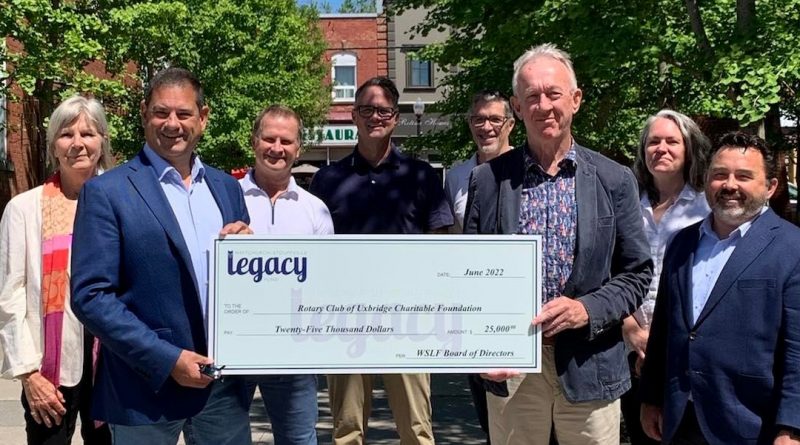 The Whitchurch-Stouffville Legacy Fund has, for a number of years, been a source of welcome support for community groups and charities. Supported primarily by funding from The Mayor’s Gala and Mayor’s Golf Tournament and some private donors, it has doled out tens of thousands of dollars to worthy endeavours.

Although funds from the two mayoral events are the primary building blocks for the fund, the fund is arm’s length from the mayor’s office with an independent board of eight volunteer community members that assess applications and award grants.

The activities of the board are not connected to official town activities, nor is tax revenue from the town used to support the Legacy Fund. The sole purpose of the fund is to provide funding to local community groups and charities that would, in turn, contribute to the betterment of the community.

Greg Smith, board chair, notes that the board is apolitical in outlook and that all applications are vetted and awarded independent of any political process and based on each application’s merit.

The fund routinely reviews and awards projects funding three times a year, providing tranches in February, June and October. The next window for applications opens on February 1 and closes on the last day of the month.

The fund has taken on an essential role in the community over the last few years, observes Smith.

“Once the fund got a little more well know, and what it was all about, we started to see more and more submissions come forward.” That suits Smith and the board fine, and Smith adds it has been a great experience going through all the applications.

Smith notes about 30 awards are typically doled out each round. Requests range from a few hundred dollars to tens of thousands. And while there is no set limit on either end of the spectrum, he makes clear that the bigger the request, the more important that the proposed project benefits more people in the community.

“An application could cover one or more areas, but we ask (applicants) to identify what they feel would have the most impact,” says Smith.

He adds that even if the organization is larger and operates beyond Stouffville, they are still considered.

Successful applicants can also re-apply for funding in subsequent rounds. Organizations that have received funding in prior funding cycles include schools, churches, sporting, arts, social and service groups such as the 55+ Club and Stouffville Legion, as well as charity and community events like the Strawberry Festival.

The fund can also be tapped during extraordinary circumstances to assist residents and even neighbours, such as was the case after the storm of May 2022 that saw millions of damages to properties. A donation of $25,000 went to the Uxbridge storm relief effort managed by the local Rotary Club, as well as support for Whitchurch-Stouffville residents recovering from property damage.

Photo: Greg Smith (second from left), along with members of the Whitchurch-Stouffville Legacy Fund board and Mayor Iain Lovatt (centre), present a cheque to the Rotary Club of Uxbridge to support their recovery effort from the storm of May ’22. Most of the grants from the fund, however, stay in Stouffville.