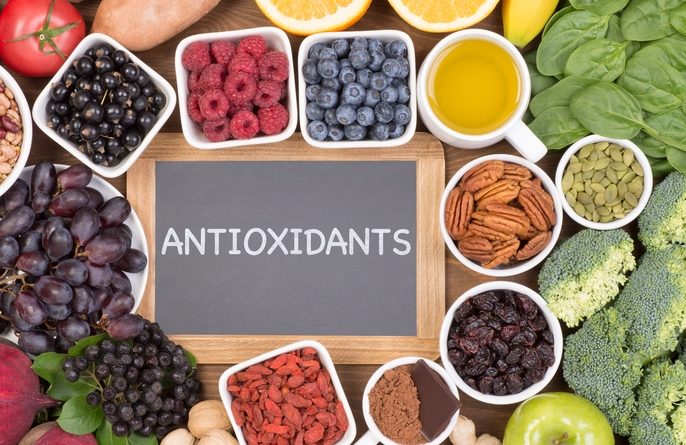 Some of you reading this might recall the game of PacMan. A game of maneuvering a little yellow eyeballed pie shape across tiny white dots which acquired you points along the way. As the character moved towards each corner of his square-shaped maze, he used his superpowers to engulf the monsters with his speedy abilities gaining more points along the way.

Antioxidants are no different. They exist in our makeup to scavenge the bad guys circulating within our bloodstream.

As compounds found in food, nutrients are converted to antioxidants produced in the body, which prevent or delay damage to our cells. They communicate and support one another as a dynamic team defending against destructive unstable molecules called free radicals.

And while there’s no escaping these free radicals, since they’re created naturally when we breathe, exercise, and convert food to energy, we can prevent their proliferation with antioxidants.

Examples of antioxidants include vitamins C and E, selenium and carotenoids, such as beta-carotene, lycopene, lutein, and zeaxanthin.

The primary benefit of an antioxidant is its ability to safely react with free radicals before damage can be done on a cellular level. There are also environmental sources of free radicals such as cigarette smoke, air pollution and sunlight.

To keep it simple, there’s no one specific food or supplement for acquiring all of the benefits antioxidants lend to the body for peak health. A rich balanced diet will ensure a body’s defences are at their prime for allowing it to fight oxidative stress and negate other implicating formations.

Furthermore, now more than ever, food science has evolved to isolate specific beneficial compounds to determine which part of the body may benefit more than others for specific health benefits.

Glutathione, Astaxanthin, Riboflavin (vitamin B2), Selenium, Vitamin C, Vitamin E and Zinc are commonly referred to in the world of antioxidants.

For example, we know that Matcha contains about three times more antioxidants than high-quality regular green tea. We know that blueberries have the highest antioxidant capacity of all the popular fruits and vegetables due to its high concentrations of flavonoids.

The red pigmentation of foods such as tomatoes, pink grapefruit, guava and watermelon is due to the carotenoid lycopene. Pomegranate juice contains the highest antioxidant capacity compared with other juices, red wine, green tea, tomatoes, vitamin E and other sources of antioxidants. The juice contains at least three major antioxidants and it has three times the antioxidant power of red wine or green tea.

Vitamin C reaches every cell of the body. It’s water soluble and the body does not store it. To maintain adequate levels of vitamin C, people need to consume foods continuing it every day.

The body needs vitamin C for various functions. As an antioxidant, it helps remove unwanted substances known as reactive oxidative species (ROS) from the body. It also helps the body absorb iron, boost the immune system and enhances wound healing.

Overall, antioxidant compounds from diets rich in fruits and vegetables will ensure you’re protected from those pesky free radicals and will of course benefit other systems in the body. Take a cosmetic spending break by considering that those expensive lotions and potions fortified with vitamins are taking second stage to the antioxidants your body really craves from whole foods.

Next time you’re jonesing for a Java, try a Matcha. And a perfect summer dessert of fresh berries and whipped cream is delicious option. The list of smart swaps goes on and I assure that it’s all for the greater good of your optimal health.