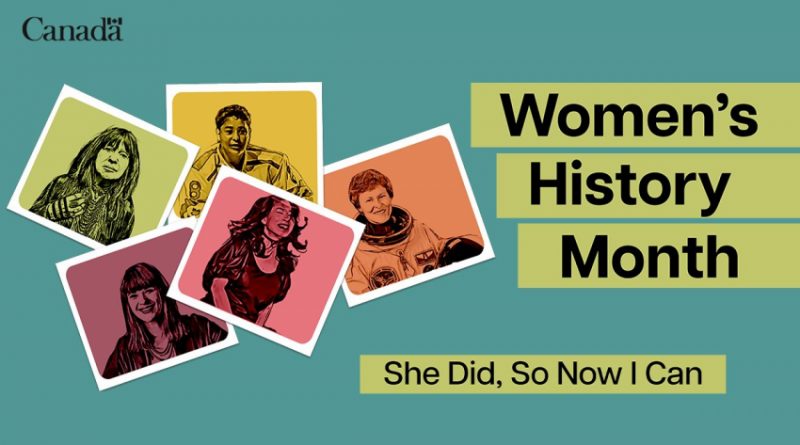 Every October since 1992, Canada has recognized and celebrated women and girls who make a difference.

This year’s theme, “She did, so now I can,” honours female trailblazers who defied gender norms and helped shape Canada’s history.

The theme “celebrates the actions of inspiring Canadian women that positively impact our lives today. We are thankful for their courage and for inspiring us to do better,” said Marci Ien, Minister for Women and Gender Equality and Youth.

“Amazing women and girls are all around us, making a difference each and every day,” Ien said. “They build a more inclusive society, one decision at a time, may it be large or small. Whether they save lives, make astonishing discoveries, volunteer their time, or defend a cause they believe in, it’s their persistence and passion that contributes to greater gender equality for us all.”

“Thanks to the hard work of activists and feminist movements, women in Canada have the right to choose, paid parental leave, and – in federally regulated workplaces – the right to be paid the same as their counterparts,” said Prime Minister Justin Trudeau in a statement released Oct. 1.

Women’s History Month is a time to honour those who “raised their voices as agents of change in fields where they were under-represented, including the arts, education, and politics, and paved the way for future generations of women and girls to succeed,” he said.

Trudeau cited Rosemary Brown, the first Black woman in Canada to sit in a provincial legislature, inspiring more women to pursue politics, and Sheila Watt-Cloutier, a Nobel Peace Prize nominee and Inuk activist, who identified the link between climate change and human rights.

He offered that the federal government’s Early Learning and Child Care system is one way Canada breaks down systemic barriers for women. The objective is to reduce costs for regulated child care this year and an eventual $10-per-day average child care cost throughout Canada.

In 2017, the federal government created the Feminist International Assistance Policy. The policy aims to reduce poverty by advancing gender equality and promoting equal rights for women and girls internationally.

It is also based on the premise that society is more prosperous, peaceful, secure, and united when women’s rights are respected, and women are valued and empowered in their communities.