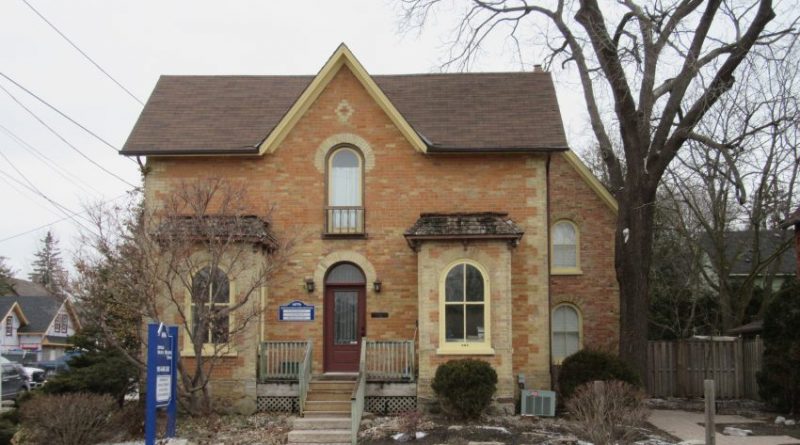 A fine orange brick home, with its many chimneys and fancy corners, stands at the intersection of William St. and Main St. It was built in 1884 on lot 9, plan 35.

The Gothic-style home has Victorian features unique unto itself. The semi-circular arched windows had rounded shutters. The windows are two over two glass. The bay extensions had, at one time, wrought iron trim at the roof edge and included shaped shingles and brackets under the soffit. Between those bays was an upper balcony with a door located where the fixed glass is now. The fence was often talked about as being a neat white fence with solid turned posts on each corner. An old photo shows the fence with a top rail and a baseboard between which was located poultry wire.

The west porch facing onto William St. is a match for the east side as well. There have been additions to the home. To the north, a matching piece was added circa 1895. More currently, the addition to the east blends beautifully with the original home.

As an act of kindness, Baker offered the place for rent to Rev. H. W. Knowles, who proposed having his family move into town. Knowles was the home missionary for the Presbyterian Church in town, back when it was still a frame church.

At one time, Baker owned a shingle and planing mill near Ringwood. Later, he ran the sawmill at Baker Hill for a number of years. While in town, he engaged in the lumber trade, which was located on Edward St. He was a joint partner in Stouffville mill with his brother, J.L. Baker.

Joel Baker also served on Whitchurch council as the town had not yet been incorporated. His years included 1867 and 1869 through 1872. He was an advocate for proper drainage, efficient street lighting, and a system of waterworks.