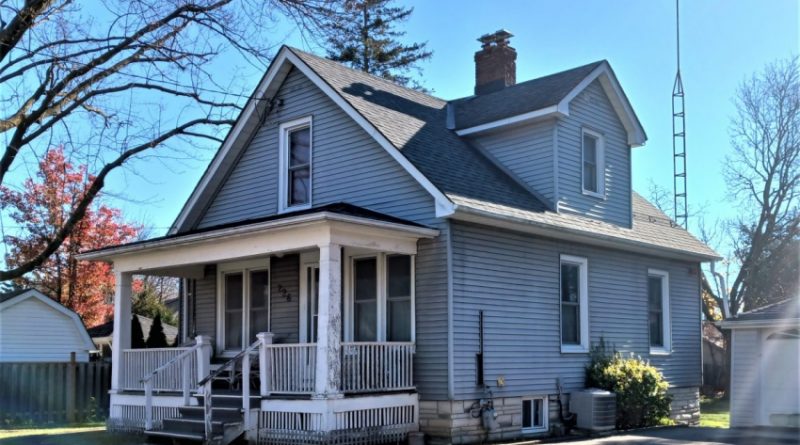 On a cool afternoon, one can walk through this heritage neighbourhood and find very different types of homes.

This average-size frame house has a porch across the entire front with tapered full-length columns. It may remind some people of the Sears catalogue homes which were popular in the early 1900s.

The streets in this area have a few similar homes to those catalogue homes. This model was a story and a half with a large dormer on the upper roof.

Sears sold a variety of plans and materials for houses, including Modern Home No. 147 available for $872 in 1913. A century ago the typical salary was $687 per year.

Elizabeth Hutchinson was living on Harold Avenue in 1920 purchasing the building for $2,000. The same day she took out a mortgage for $1,000 from a neighbour Allen Closson. The mortgage was paid off in ten years. She sold her house on Harold Avenue to Isaac Boadway.

Boadway had been a carpenter/builder in town for twenty years having learned the trade in Toronto. He was born in a little pioneer cabin home right here on Main Street in the east end close to the street called Harding Gate named after the Harding family which had a home on the corner. He was likely the builder of this house on Harold Street as noted in the local paper.

Closson purchased the house from Boadway and lived there for ten years.

The sale on Sept. 10, 1952, from Closson to Archie Forfar, was for $7,250. This house on Harold Avenue was a rental property and was rented by Norman Lehman. Forfar and his bride moved into this home as newlyweds. They lived there for four years.

Leonard W. J. Buckland was the next owner. He had moved quite a bit in town living on Victoria Street, then moving to Edward Street and then this home on Harold Avenue in 1956. After only a year Buckland sold the home for $11,500 to George M. Johnson of Ringwood. Johnson made this his long-time home and raised a family there for 24 years, staying until 1981.

One thought on “226 Harold Avenue built by Boadway”