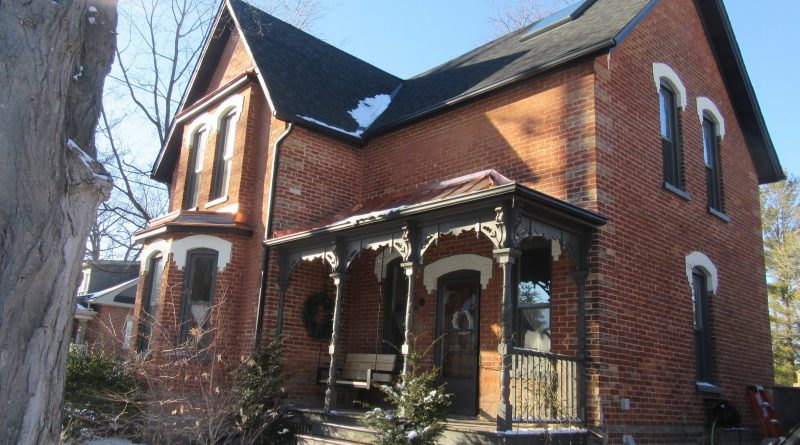 The lovely two-story solid brick home at 169 Rupert Ave. was built in 1887 by Fredrick George.

His brothers, Samuel and Richard, had a Planning Mill (now Schell Lumber) on Edward St. Frederick later rented the house to Arthur Fleury who was co-owner of the Fleury Bros. Foundry and was employed as a molder.

The foundry is now called Schell Co-op building; an industrial heritage site. The Fleury family soon after relocated to Aurora.

The Victorian style of this house has features like other buildings in the heritage neighbourhood. The accent brick was yellow and highlighted the window arches. A two-story bay on the front is facing south. With the new upgrade of copper on all the roof details including the porch it enhances the heritage and greatly adds to the decoration and streetscape.

The front porch has a bell cast curve roof and the copper here looks amazing. The profiles of the posts look original. The gingerbread is designed to represent the agricultural farming which surrounded the village. The wheat sheaf is a common theme seen on many homes. It may have even been the trademark for the woodwork done by the George brothers.

On April 28, 1902, Frederick George sold the property to Ella MacDonald for the sum of $1,100. The next few owners lived at the house just a few years each. By 1929, the Ratcliff family bought this property as an investment. Glenn Ratcliff had been with the Royal Canadian Navy during the Second World War. On Oct. 15, 1947, he bought the home for the sum of $4,000.

In 1948, Glenn Ratcliff gave the house to the trustees of the Stouffville Baptist Church. They used it as a manse.

Some residents might remember that Glenn had a grocery business and started the IGA here on Main St. That space is now the Stouffville Fine Furniture store on the south side of Main.

Mr. and Mrs. Warren “Stuart” Bellamy purchased the Baptist church parsonage on July 4, 1962 for $6,000. Stuart and his wife June lived at the home.