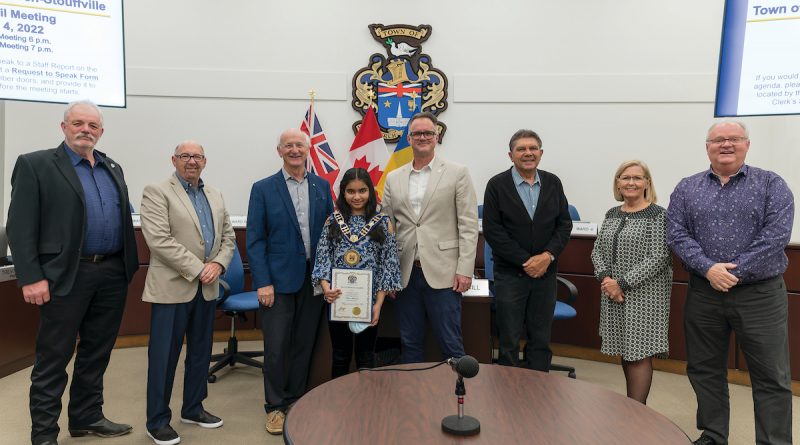 The Office of the Mayor is thrilled to announce the winner of the 3rd Annual Mayor for the Day contest in Whitchurch-Stouffville.

Nethira Vithakaran was “sworn in” at a recent Wednesday night council meeting as the Mayor for the Day.

Soon-to-be eleven-year-old, Mayor Vithakaran was picked up from Glad Park Public School in style by a Fire Truck from Station 51.

From there, Mayor Lovatt escorted her on several tours of town facilities including the Operations Centre, Fire Station 51, the Leisure Centre and Town Hall.

Following dinner with Mayor, Council and Staff, Vithakaran ended her term as Mayor by opening the council meeting while sitting in the Mayor’s seat.

“Nethira’s video submission was so well thought-out and organized, Mayor Iain Lovatt said. “Her ideas were not only practical and feasible but also inclusionary and she took the initiative to link each idea to our town values. We were thoroughly impressed by her presentation!”

“Being Mayor for the day was a fantastic experience for me,” Vithakaran said. “Including a bouncy ride on a fire truck. I gained a lot of additional info about the Town of Stouffville and the wonderful facilities that serve the community. Together we build a caring community.”

Open to Whitchurch-Stouffville students in grades 5-7, the Mayor for the Day contest launched in February and gave students an opportunity to share their ideas of how to make Whitchurch- Stouffville an even better place to live. Applicants were invited to submit either an essay or a three-minute video.

Photo: Nethira Vithakaran was “sworn in” at a recent council meeting as the Mayor for the Day. Photo courtesy of Dennis Hristovski.