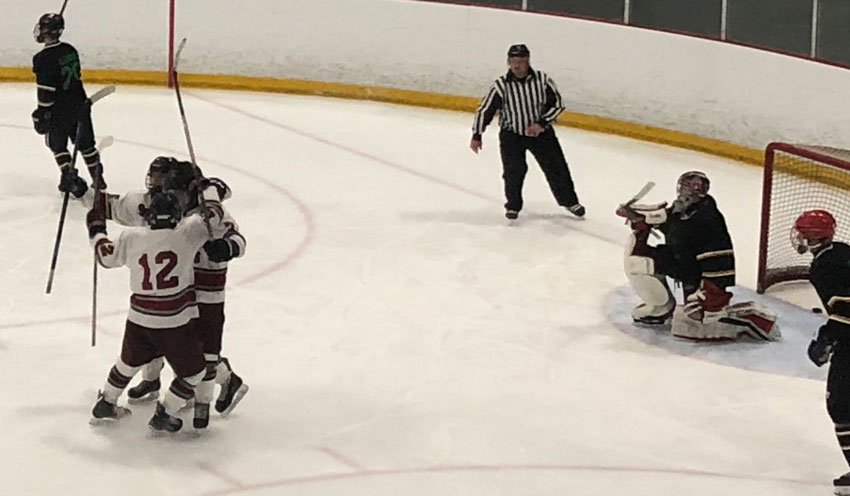 It’s a much younger group taking the ice for the Stouffville Spartans this season. That age difference hasn’t affected the senior boys team negatively at all, though.

Stouffville’s young guns have gotten off to a strong start this season, knocking off a couple of undefeated teams in the process.

“It’s a bunch of new guys coming in,” said Spartans goalie Evan Farrell. “We’ve got a really young team, but it’s good, because we’re all melding together. Last year, we had a lot of Grade 12s and Grade 11s, so when that happens, you’ve got a lot of new guys the next year. Everyone’s fitting in and working hard and playing good hockey.”

Their commitment to competing and better learning the game has made it a smoother transition.

“It’s our work ethic,” said Spartans coach Jamie Hewitt. “We’re not an overly talented team this year, but they’ve really bought into the system. They’re really nice kids and they really want to learn and please, so their work ethic is really good. To have a team this young outhitting an older, talented team (like we did against a previously unbeaten King City squad) is impressive.”

For many of the younger players, this is only the second season in which they’ve competed with body checking, which begins in minor bantam. Although they’re trying to do so now against kids a few years older, that hasn’t deterred the Grade 9 players from going into the corners.

“Nobody’s afraid to throw a body check on this team,” Farrell said. “Our game plan is to throw the body and if the (other team) has the puck, they’re getting hit. Nobody’s afraid to go into the corner, and it’s really cool to see that the Grade 9s and Grade 10s aren’t scared to throw a hit and maybe take one too.”

There are some high-level players on the Spartans, and now they’re seeing how they measure up against guys competing at the same level, albeit several years ahead.

“It’s always interesting when you see a Grade 9 triple-A guy come in,” Farrell said. “Now he’s going up against some of the Grade 12 triple-A guys. You could be one of the best at your age but when you come into school hockey, now you’re playing guys from 14-18 years old. It’s cool to see those top level guys come in and compete with Grade 12s at the same level.”

However, being able to get them all on the same page in Stouffville’s systems has taken a bit of work.

“They’ve adapted pretty well, but there’s so much to teach and so much to do,” Hewitt said. “For example, our power play is not very good right now and, if we’re going to go anywhere, it needs to be really good. Just teaching them the defensive assignments (is significant). We do a lot of puck watching and when the puck carrier comes through, we just watch the puck. The trailers come through after in their lanes and we don’t pick anybody up. So that’s been the biggest thing, teaching the defensive assignments in all three zones. Also, we need to improve at getting it out of our zone. We were just ringing it around the boards. We’ve worked a lot on tape-to-tape structure for getting it out of our end.”

They’ve improved to the point that Hewitt carries no concern to the age of the player when sending him over the boards.

“The older guys have done a really good job,” Hewitt said. “They’ve been great leaders and have brought the young kids along really quickly. They’ve been battling for ice time and it makes the older players realize that nothing is given for free here. The way I coach, every period you earn your ice. I don’t even know young guys and old guys anymore. It’s a whole team and I can’t even tell who is in Grade 9 and who’s in Grade 12.”