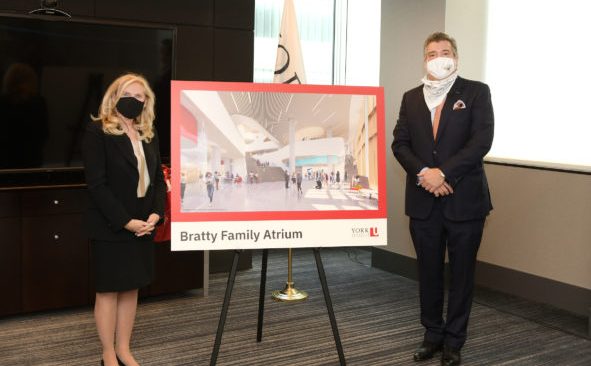 York University has received a $10 million gift from The R. P. Bratty Family Foundation toward the creation of the university’s Markham Centre Campus (MCC).

The Bratty family’s substantial donation reflects a commitment to education that has been passed down through generations of their family, since coming to Canada in the 1920s.

“My parents’ biggest regret was that they never got to go to school,” says Rudy Bratty, Chairman and CEO of The Remington Group. “They regarded education as a privilege, so when I finished high school and decided to become a builder, like my father, he sent me to earn a bachelor’s degree. When I finished that, he made sure I continued on to get a professional degree.”

Rudy Bratty graduated from York’s Osgoode Hall Law School and was called to the Bar in 1957, beginning a long career as a lawyer and developer.

Over the years, the Bratty name has become synonymous with real estate development in Southern Ontario and throughout Canada. The Bratty family has supported York University for decades.

“This contribution will not only support the MCC’s ability to provide a high-quality student learning experience in newly emerging and high demand programs but facilitate the research, innovation and creative activities contributing to York’s larger mission to build inclusive and resilient communities in one of the fastest-growing regions in Canada,” said York University president Rhonda L. Lenton.

York Region is underserved in terms of universities,” says Chris Bratty, president of land development at Remington. “That’s why we’re so proud to partner with York University to make this campus possible in Markham. This will be a significant building block for downtown core of Markham specifically and we hope it will attract businesses and cultural centres to the region.”

Set to open in Fall 2023, the MCC will be the first public university campus in York Region. MCC will offer employer-aligned degree programs, certificates and other credentials – with a rich array of experiential education activities – in high demand areas such as business and entrepreneurship, data analytics, new media and communications.