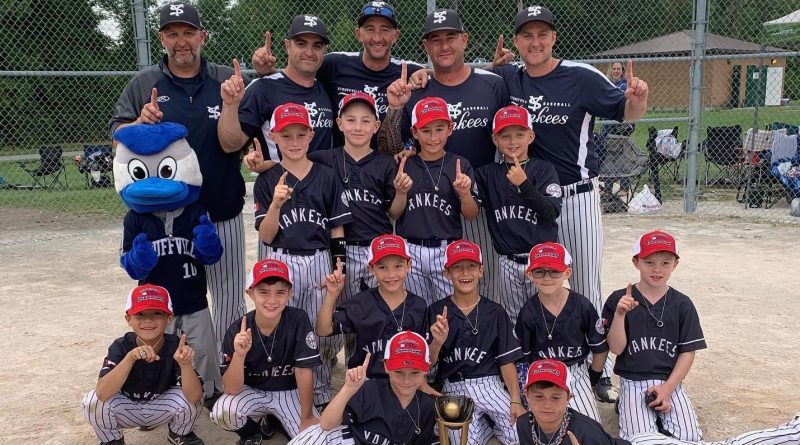 The Stouffville Yankees capped off an incredible season in style.

Playing in this past weekend’s major rookie ‘AA’ Ontario Baseball Association (OBA) championships, the Yankees were nearly perfect, winning the finals to take home the title.

Stouffville entered the tournament as the York-Simcoe Baseball Association (YSBA) champions, posting a 14-1 regular season record before winning the regional event to determine who went to OBA’s.

On Friday, the Yankees defeated Scarborough 14-1 in their first game before losing a nail-biter to the Vaughan Vikings in a rematch of the YSBA finals.

That meant Stouffville had to be perfect the rest of the tournament, beginning with a trio of games that started Saturday morning.

The Yankees shut out Guelph 12-0 and then knocked off Waterloo 13-7 before an 11-1 hammering of Kitchener advanced Stouffville to the semifinals on Sunday.

After defeating Hamilton, Stouffville moved on to the finals against a very familiar opponent in Vaughan.

This time, the Yankees came out on top, as a 9-4 win earned Stouffville the provincial title. Congratulations to coach Shane Pegg and all of the players on their victory!

This spring, 19 on the Park welcomes CASH: The World’s Most Authentic Johnny Cash Tribute. Paul Anthony’s voice is a