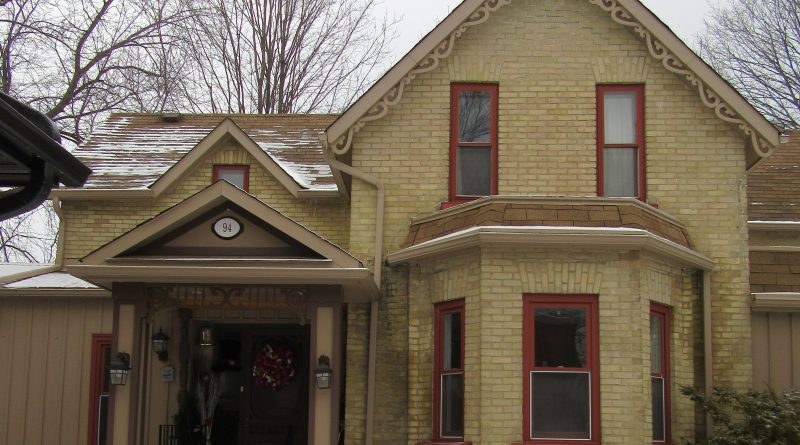 As the neighbourhood began to fill in, the next plan on O’Brien Ave., as it expanded south was Plan 1073.

The large house on the south corner had been finished in red brick with Victorian porches in 1890 and was registered by R.J. Daley.

Sylvanus Woodard, a retired farmer from Victoria Square, purchased this property in April 1893. He is listed as a carpenter in the 1881 census and thought to be the builder as it proved economical. He bought Lot 5 and Lot 7 for the price of $100.

Sylvanus was the oldest of 15 children. His sister married Alex Fleury (from Edward St. foundry). Both Alexander and Sylvanus were witnesses to the marriage of Elizabeth, their sister, to Christopher Doner in 1847 by Rev. John Baxter.

Sylvanus was living in King Township in 1861. He had two children, Sarah and Euphoria. Elizabeth, his wife, was a Bovair.

By 1881, Sylvanus was living in Victoria Square, next door to Sarah. She had married Thomas William Klinck on Feb. 29, 1876. They raised four sons and two daughters.

In 1906, Sarah and Thomas Klinck moved into the house with their family and her mother, who later died in 1918.

The house was rented out to Rev. Robert Young of the St. James, Presbyterian Church while he was preaching in town, from 1917-1925.

The house had a fire in 1936 when Harry Klinck – Sylvanus and Sarah’s youngest son – was living there. The fire started when the coal oil stove broke out, bursting into a serious blaze. The fire brigade quickly drenched the fire, leaving the kitchen in need of some new wallpaper and paint.

The estate was finally settled when Sarah Klinck passed away at the age of 98. This beautiful home had remained in the same family for over 60 years. What a legacy of fond memories.