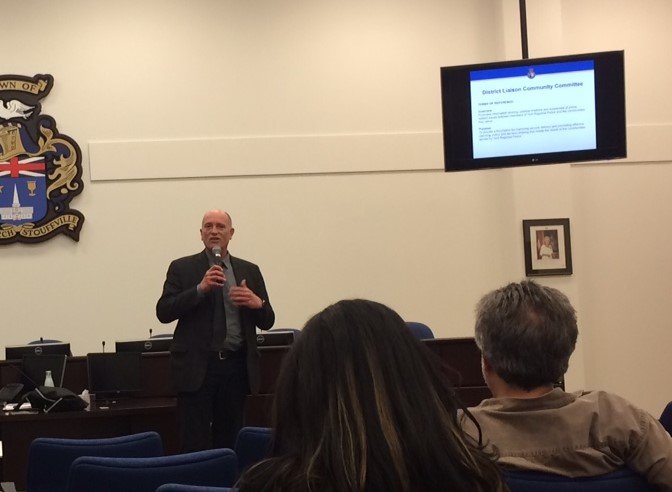 In light of recent break and enters as well as theft and fraud cases that have affected local businesses and homes, York Regional Police collaborated with Mayor Justin Altmann to devise methods in an effort to make the town a safer place.

In 2017, local police increased the number of working officers to five to six per shift, giving York Region the best ratio of police to population compared to other municipalities. Currently, there are a minimum of three police vehicles circulating the town at night.

When discussing what residents can do to prevent crime, Det. Sgt. Patrick Smyth said to be alert to any suspicious behaviour. If you notice something unusual, note the physical description of the person, their car and even their license plate number. Also, see where the car is from by checking the license plate because 80 – 90 per cent of offenders are from different regions.

According to the police, there are lower break and enter rates in the summer because it’s brighter during the day and people tend to come out more. In the winter, when it gets dark much earlier, is when individuals or groups come out to engage in criminal activity.

Since September 2017, there have been nine different groups and 17 individuals arrested in York Region. Insp. Rhonda Corsi said if you witness any suspicious behaviour, call 911 immediately.

“You have to help us help you,” said Corsi. “You are our eyes and ears out there.”

Another crime prevention tip is to make your house look lived in. Make it look like someone is living in the house by keeping the lights on. By keeping backyard lights on or having a timer for indoor lights will lessen the chance of a break and enter at your home. If you’re going to be away for an extended period of time, tell a neighbour so they can keep an eye on your house. Some ways neighbours can help when you’re away is by collecting your newspapers or mail and putting one of their bins on your lawn when it’s recycling day.

The last topic of discussion was fraud and what to look out for, especially when it comes to online shopping. Det. Kevin Dority said to ensure that the sites you visit are credible. He also pointed out that emails are a common form of fraud: check for any misspelled words or grammatical errors to help verify whether the message is real or fraudulent. As well, phone calls have recently become a common form of fraud, with most callers saying they’re from the Canada Revenue Agency (CRA). Dority pointed out that neither police or the CRA will call you, so hang up immediately if someone suggests that they are from one or the other.