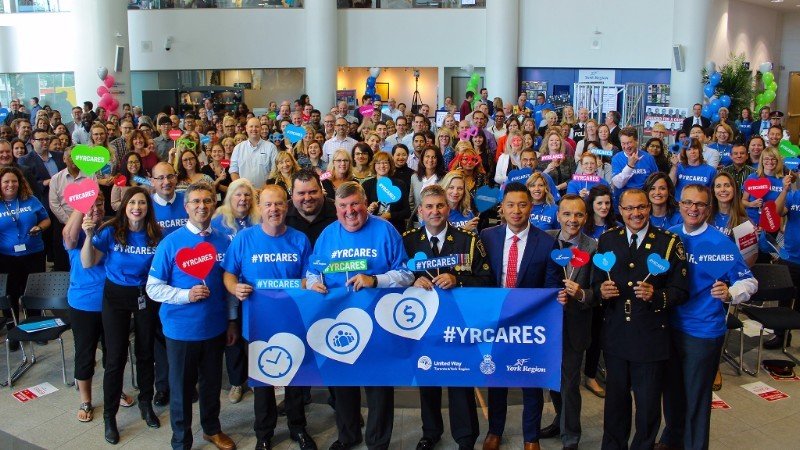 As part of the official kick-off, York Region unveiled a new campaign theme – #YRCARES – to celebrate and acknowledge York Region’s long-standing culture of caring. Over 23 years, York Region’s annual fundraising campaigns have raised more than $4.3 million to help those in need within local communities.

“We are fortunate to live in a place as prosperous and full of opportunity as York Region, but we know there are individuals and families who are struggling in every community – including ours,” said York Region Chairman and CEO Wayne Emmerson. “Our long-standing partnership with YRP and our commitment to giving back through United Way Toronto and York Region is consistent with our vision to create strong, caring and safe communities.”

YRP Chief Eric Jolliffe echoed that sentiment during his remarks at the campaign launch.

“Our members work every day to live our mission of making a difference in our community,” said York Regional Police Chief Eric Jolliffe. “We make this difference both through financial support but also through volunteer work – sitting on boards of directors, hosting fundraisers and seeing up-close why these charities matter and why they need our support.”

Over the past two decades, York Region and YRP’s fundraising efforts have risen alongside the Region’s population growth. As the demand for support increases, so too has York Region’s charitable contribution through the annual campaigns.

“Last year, our campaign raised more than $575,000 in support of United Way Toronto and York Region and we are working hard to ensure this year’s campaign is just as successful,” said York Region Chief Administrative Officer Bruce Macgregor. “Together with our partners at YRP, I have every confidence we will continue to give back to our community in a big way.”

The Regional Municipality of York consists of nine local cities and towns, and provides a variety of programs and services to 1.2 million residents, 50,000 businesses and 595,000 employees. More information about the Region’s key service areas is available at york.ca/regionalservices