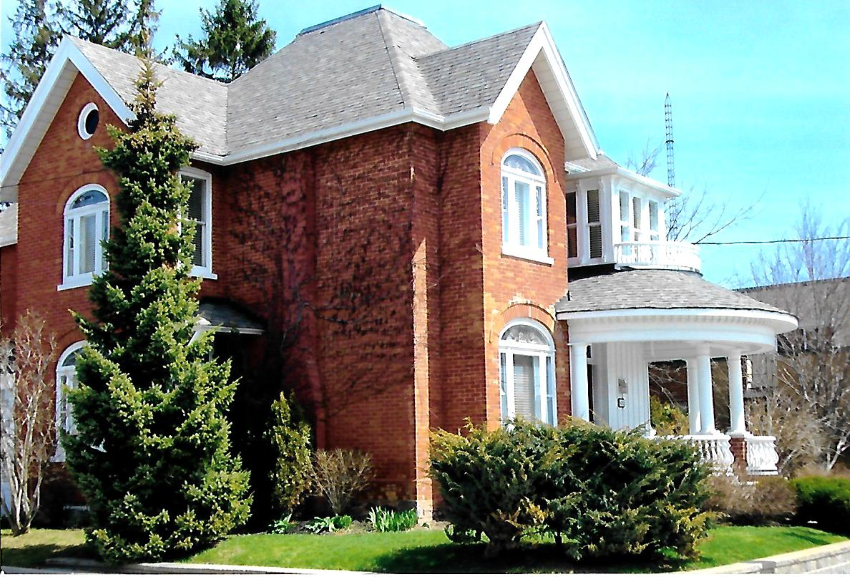 This building was built to be used as a bank and was originally named the Standard Bank. The business ran from the late 1880s until 1928. It appears on the 1910 fire insurance map of Stouffville as a brick building on Main St. It was located in the heart of downtown to accommodate the business transactions in town. Next door was the multi-purpose fire hall and library, now 19 on the Park—an area filled with buildings of cultural and historical value.
The front of the bank once had three Roman arched openings on the main floor, two of which were the bank windows and one the entrance. Upstairs the segmented arched double hung windows remain. They are outlined with a soldier course of brick. The parapet wall at the top of the building was once covered with a sign; is now visible to accent the design. The red brick two storey with red mortar has a traditional commercial look for that time period. It was close to the street and had a strong presence here.
A.C. Burkholder was a key player in the town’s banking sector. He had grown up with the banking business from a young lad. Addison C. was born in Lemonville, the son of John Burkholder. He came to Stouffville and entered into the private bank business operated by the late Walter Miller. Burkholder became associated with the chartered banks when the Sovereign Bank took over Miller’s business, which had been known as the “Imperial Bank”. Burkholder later became the manager of the Standard Bank and stayed on during the transition to the Canadian Bank of Commerce.
Officials of the Canadian Bank of Commerce were in Stouffville the week of Oct. 4, 1928. They were inspecting the books of the Standard Bank preparing to take it over the latter bank on Nov. 1, 1928. About the only change the people saw in this section of town was realized at the front of the bank premises when the sign which read “Bank of Commerce” where it once read “Standard Bank of Canada.”
The offices above the bank were used by Dr. Neil Smith, a dentist. He had just graduated with honours from dental school from the University of Toronto in 1928. He was working with his father Dr. D. C. Smith also a dentist before opening his own office here above, in 1932.
The building has gone through change with a rear addition at one time. The large glass windows now on the main floor were installed before 1962. This office space was used by the Town of Whitchurch-Stouffville as a planning department building. Now it has returned to the financial use as originally planned; being a chartered accountant office.