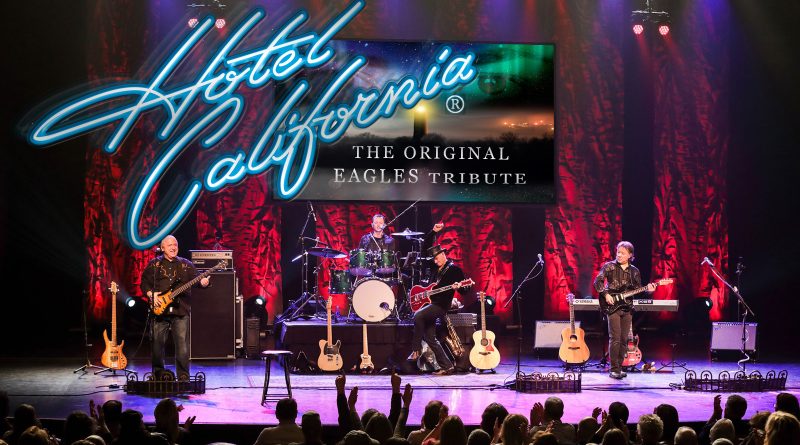 The iconic 70s rock and country band, the Eagles, occupy a difficult to explain space in pop culture. For much of their career, they were both under-appreciated and overestimated at the same time. While they’ve consistently sold out stadiums and arenas for nearly four decades, they’ve barely released any new music since 1979. It’s in the space between being deeply loved by millions and being completely unassuming to others that they’ve managed to become a quiet but massive force in music.

When the Eagles broke up in 1982, it seemed like the end of their story. However, once they were gone, the music they made took on a life of its own. The generation of fans that fell in love with the group passed it along to the next generation. Of course, that left the music with a huge and growing fanbase and no one playing it. That’s where Hotel California, the band, comes in.

“Our band started in 1986,” says Dimoulas. “It was about people getting to experience Eagles’ music.”

The group spent extra time in rehearsal, not just to get the notes right but, to practice sounding like the band members themselves. The idea was to recreate the music and the unique textures and personalities of the people who made it.

“A lot of people forget what the word tribute means,” continues Dimoulas. “The point is to pay homage to what they did.”

It wasn’t long until their reputation preceded them. In the first years of the band, they were the best way to hear Eagles music. Even after the Eagles reformed in 1994, with a half dozen session musicians to back them up, Hotel California remained the best living document of what the band sounded like in their golden era of the 1970s.

“We try to stay true to the original band and arrangements,” says Dimoulas. “We don’t bring 50 people onstage with us…but it is about the accuracy of the music itself.”

The music speaks loud and clear too. Songs like Take it Easy, Witchy Woman, Peaceful Easy Feeling, Hotel California, Heartache Tonight and Life in the Fast Lane are just a taste of what each show contains.

“Their repertoire is so big that we could be onstage for a whole night,” says Dimoulas. “We do all of the hits.”

Further, because they strive to recreate an authentic Eagles experience, they also dig in to the solo catalogs of Don Henley, Glenn Fry, and Joe Walsh. This was a practice the Eagles themselves started when Joe Walsh joined the band in 1975 and added Rocky Mountain Way and Life’s Been Good to their encores.

“We have chosen all the best stuff to play … just like the Eagles used to do,” Dimoulas adds.

Since their first shows in 1986 the band has toured the world many times over. They’ve even shared the stage with the actual Doobie Brothers, Lynyrd Skynyrd, Styx, REO Speedwagon, Gretchen Wilson and many more international artists. They’ve performed in Dubai, Japan, India, Bermuda and all over North America.

“It all comes down to respect and admiration for each other, Eagles music, and what we do,” says Dimoulas. “That’s why we’ve lasted so long.”

“They come and they love it,” he says. “We get ‘em up dancing every time.”

Hotel California plays the Flato Markham Theatre on April 18. Tickets are available by calling 905-305-7469 or by clicking  here.